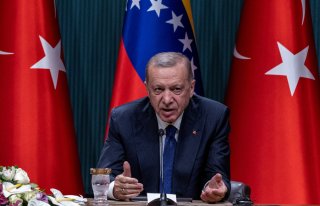 In a phone conversation with NATO Secretary General Jens Stoltenberg, Turkish president Recep Tayyip Erdogan acknowledged that progress had been made in resolving Turkey’s ongoing diplomatic clash with Sweden and Finland but insisted that Ankara needed “concrete steps” from the two countries before it would approve their bids to enter the trans-Atlantic military alliance.

Erdogan added that such steps would need to meet Turkey’s “rightful expectations” and would include a renewed commitment to opposing “terrorism” and maintaining coordination between the three nations’ armies and defense sectors. Turkish officials have objected to Sweden and Finland’s policies on both counts. Although both nations recognize the Kurdistan Workers’ Party, or PKK, as a terrorist group, they have cooperated with other Kurdish groups—notably the People’s Protection Units, or YPG—that Turkey has claimed operate as extensions of the PKK. Sweden and Finland also suspended arms exports to Turkey in 2019 after a Turkish military intervention against Kurdish groups in northern Syria, a decision that angered Erdogan and other members of Turkey’s leadership.

Although both countries have taken steps to improve relations with Ankara, which holds a veto over their application to NATO, Turkish foreign minister Mevlut Cavusoglu insisted earlier in the week that Turkish expectations had not been met and warned that Turkey would veto the application unless its issues were resolved to its satisfaction before the formal admission process began.

Stoltenberg’s assessment of the conversation was more positive, and he later tweeted that it had been “constructive.” “We discussed the importance of addressing Turkey’s legitimate security concerns on the fight against terrorism and making progress in the NATO accession process for Finland and Sweden,” the secretary general wrote.

Sweden and Finland, two historically neutral nations in northern Europe, both announced their intention to join NATO last month, following an overhaul in their foreign policies brought about by Russia’s invasion of Ukraine in late February. The two countries’ accession has raised tensions along the Baltic, as Finland’s border with Russia is less than one hundred miles from Saint Petersburg, Russia’s second-largest city. Leaders in the Kremlin have warned that they could respond to the accession by repositioning nuclear missiles to Russia’s Kaliningrad exclave along the Baltic coast.

Any country’s accession to NATO requires the approval of all other member states, allowing any country to veto another’s application indefinitely over political disputes unrelated to security issues. For example, when the country then known as Macedonia applied to join NATO in the early 2000s, Greece vetoed its application over objections to the country’s name, which officials in Athens argued implied a claim on Greece’s northern region of the same name. After Macedonia was renamed to North Macedonia in 2019, Greece dropped its objections, and North Macedonia entered NATO the following year.