Type 81: This Chinese Rifle is as Tough as Nails, Thanks to its Russian DNA 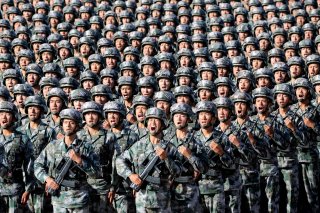 The Type 81’s genesis began in the early 1980s. Around that time, the People’s Liberation Army (PLA) had been issuing their own indigenously designed and built Type 63 automatic rifle to soldiers. This terrible rifle was an attempt at replacing both the Type 56 carbine, essentially a Chinese-made SKS copy, and the Type 56 assault rifle, a Chinese copy of Kalashnikov’s iconic AK-47.

The Type 63 was an unmitigated disaster. Chambered in the ubiquitous 7.62x39 millimeter round, the Type 63 was too long and unwieldy to be practical and suffered from poor workmanship. It was inherently unreliable, and in an implicit admission of defeat, the Type 63 was retired and the rifles it was designed to replace were reissued to PLA soldiers. The PLA went back to the drawing board and decided to try improving Kalshnikov’s design. The result? The Type 81.

Revisiting the Soviet design was partly a matter of practicality. By modifying an already-existing design, a large part of the machine tooling that had been calibrated for producing AK-47s could be retained.

One of the immediately noticeable differences between both the Type 56 assault rifle/AK-47 and the Type 81 is the 81’s longer barrel. The rifle’s front sight is also shifted slightly rearward to allow enough space for easily firing rifle grenades.

Another feature that distinguished the Type 81 is its stock, which slopes at more of a downward angle than the AK family of rifles. Although the original Type 81 rifles were equipped with a fixed wooden stock, this was dropped in favor of a skeletonized metal stock. In addition, a squad automatic machine gun variant was also produced, somewhat similar to a RPD machine gun.

The design worked—it is somewhat more accurate than the AK-47 and the Type 56 assault rifle, and could fire about 15,000 rounds before servicing was required. The Type 81 succeeded where the abysmal Type 63 had failed and secured the Type 81’s robust reputation.

Though the Type 81 had its merits, it was essentially a replacement’s replacement rifle, and was superseded by the QBZ-95, an innovative—if imperfect—indigenous Chinese rifle. It is still issued however to police and some reserve troops, where its ease of manufacture and reputation for reliability keep it relevant as a robust and inexpensive solution to arming non-frontline soldiers.

Today, the Type 81 has retained its relevance into the twenty-first-century and has popped up in a number of conflicts around the world, particularly in Africa and the Middle East, including in the Syrian Civil War. The rifle’s proliferation has been aided both by its low price point, as well as being chambered in the Soviet 7.62x39mm cartridge, easily the most accessible cartridge ever made. Not too bad for a Chinese copy of a vintage Soviet design.