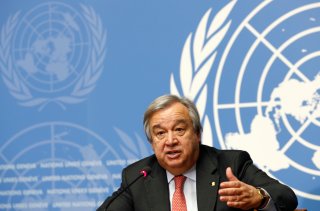 United Nations Secretary-General Antonio Guterres renewed his advocacy for the abolition of nuclear weapons on Monday, claiming in a speech that threats of their use were increasing—a statement interpreted as a thinly veiled criticism of Russian leader Vladimir Putin after he warned that Russia could escalate its conflict with Ukraine if it failed to achieve its aims on the battlefield.

“Decades after the fall of the Berlin Wall, we can hear once again the rattling of nuclear sabers,” the secretary-general told the UN General Assembly during a special session on nuclear disarmament.

“Let me be clear,” Guterres continued, “the era of nuclear blackmail must end.”  “The idea that any country could fight and win a nuclear war is deranged. Any use of a nuclear weapon would incite a humanitarian armageddon,” he said.

Guterres added that there could be “no peace” in the world without the elimination of nuclear weapons, although most experts agree that this is unlikely to occur.

Concerns about the use of nuclear weapons sharply escalated last week after Putin announced on Russian state television that the Russian military would expand its war in Ukraine, calling up 300,000 soldiers from the country’s reserves and attempting to annex four occupied areas in southern and eastern Ukraine through a series of highly suspect “referendums.” Putin emphasized that the Kremlin was willing to defend its new territory by any means, including the use of its nuclear stockpile; he emphasized in his remarks that the threat to use a nuclear device was “not a bluff.”

The United States reacted with alarm to Putin’s announcement, and Secretary of State Antony Blinken claimed afterward that Washington had warned of “catastrophic” consequences for Russia if it used nuclear weapons in Ukraine.

Prior to Putin’s speech, the UN and other international organizations had criticized the situation around the Zaporizhzhia Nuclear Power Plant in eastern Ukraine, which is located on territory now occupied by the Russian military. The plant, Europe’s largest nuclear facility, has come under repeated shelling since the start of the Russian invasion, raising fears of a radiation leak. Moscow and Kyiv have blamed one another for the shelling, although the international community has generally sided with Ukraine.

In August, Russia obstructed a draft agreement crafted by the Tenth NPT Review Conference, a UN conference created to review issues related to the Non-Proliferation Treaty (NPT), after it supported a resumption of Ukrainian control over the power plant.