Why Russia Is Carrying Out a Long-Range Bombardment Campaign 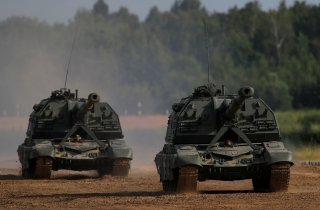 Lt. Gen. Ben Hodges, former commanding general of U.S. Army Europe, is not surprised by the effective infantry tactics being used by the Ukrainian military, as he has seen Ukraine develop as a key U.S. partner over the years.

As the commander of U.S. Army forces in Europe, Hodges crafted, strengthened, and maintained crucial U.S. alliances with NATO members and other key partners, including Ukraine. He told the National Interest that Ukraine has made significant progress in modernizing its military and refining its training and combat tactics.

“I have watched them over the last ten years. They have dramatically improved. They have grown and they have modernized. This is a much better land force than we [saw] in 2014. I’m not surprised they are doing so well against the Russians,” Hodges said. However, he added that “the question is, can they continue to do this despite the Russian advantage in artillery and rockets?”

Like many observers, Hodges credited Ukraine's tenacity and successful ambush tactics as key reasons why, as he put it, “they are doing very well so far.” Ukraine’s infantry is “outperforming the Russian infantry, [including] the Russian paratroopers that were brought in to take airfields,” Hodges said.

As Hodges mentioned, Russia does have more troops and an advantage in artillery. Russian artillery operates with digital technology and can strike far-away targets. The Russian 2S35  Koalitsiya-SV self-propelled artillery system, for instance, entered service as recently as 2018. It uses digital controls and an autoloader to fire as many as twenty rounds a minute at targets as far away as seventy kilometers. In addition, it can fire precision rounds. It is not clear how many of these systems the Russians may have, but the Koalitsiya-SV’s capabilities certainly might explain why Russia is carrying out a long-range bombardment campaign against major Ukrainian cities.

The technological reality further illustrates that Russian forces have the ability to avoid or massively reduce civilian casualties. With this in mind, it appears that Russian forces are now choosing to target Ukrainian civilians and residential areas. Long-range artillery weapons are particularly difficult to defend against in urban, less fortified areas unless fighter jets are able to locate and destroy launch points from the air. The Russians may well be opting for these kinds of attacks because they have had little success with direct combat engagements against the Ukrainian forces.