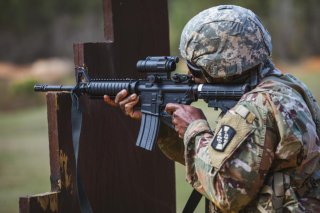 SIG Sauer was awarded the Next Generation Squad Weapon program in April 2022 to replace the M4 carbine, a weapon that has left its mark on the U.S. Army over the last two decades.

There are few weapons as iconic as the M4. It has been a remarkable alternative to the M16 rifle and has performed quite well. But now, its days as the standard U.S. infantry rifle are numbered.

The SIG Sauer XM5 is a new assault rifle developed to displace the M4 as the standard-issue firearm for the U.S. Army. The XM5, formerly known as the Sig MCX Spear, promises a significant increase in the army’s firepower without compromising on weight or comfort. It can be adapted to meet the needs of any combat situation. In a testament to its flexibility, experts praised the XM5’s modularity, which allows users to easily change components to better suit their needs.

Additionally, the XM5 design features several improvements over the M4 such as a more ergonomic design and increased accuracy. But the most striking feature is the new cartridge that comes into play with this rifle, the .277 Fury.

This cartridge is 6.8mm and it closes the gap between 5.56mm and 7.62mm. The XM5 rounds are more powerful than the M4, and although it does not reach the power of a 7.62mm cartridge, it has an ideal middle ground that allows soldiers to fire without experiencing as much recoil.

The main advantage of this innovative cartridge is that it can penetrate the new protection systems developed by China and Russia—which are resistant to M16/M4 rounds—highlighting why the XM5 is so important today. It has the best of the M4 and the M14 in a single system.

The M14 rifle, with its 7.62×51mm NATO cartridge, is considerably more powerful than the M4  and XM5. But its recoil, maneuverability, and weight don’t make it versatile enough for infantry. Therefore, the U.S. Army will regain some of the power lost when the M14 was replaced by the M16.

However, the XM5 has its critics too. The competition to become the U.S. Army’s standard issue rifle was quite fierce. Other assault rifles from companies such as General Dynamics and Textron Systems performed well and their rifles could have been integrated as well. SIG Sauer was the winner of the Next Generation Squad Weapon competition but without an overwhelming edge over its competitors.

In any case, soldiers will receive their new rifles by 2023, and after it is thoroughly tested, the U.S. Army will confirm the full potential of the XM5. Meanwhile, the XM5 will be in the shadow of its predecessors because the task of dethroning legendary rifles such as the M1 Garand, the M14, and the M16 will not be easy. It will eventually need to be tested on the battlefield to stand up to these past standard-bearers.

Going forward, experts will no doubt watch to see if the XM5’s battlefield performance lives up to expectations. It is the first time in decades that the U.S. Army is considering a new weapon for its troops and SIG Sauer was acknowledged as one of the most trusted suppliers.

We can only wait for the XM5 to enter service, at which point the XM5 will officially become the M5. The M5 will have to earn its place in history and prove why it was chosen as the first U.S. Army assault rifle of the twenty-first century.

Mario Samuel Camacho is a military enthusiast who has been closely following the military industry and its armaments for years. He has collaborated with several magazines to inform about military news around the world.