Will Turkey's Army Once Again Punish Assad For Breaking A Syrian Ceasefire? 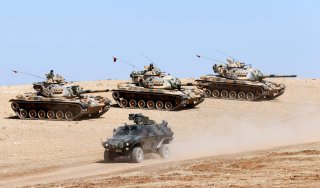 Here's What You Need To Remember: When Turkish forces bombard the forces of Moscow’s ally Assad, it places Russia in an awkward position with allies old and new. Nonetheless, this conflict was long foreseeable: Turkey had made clear its objection to an offensive on Idlib province, while it was obvious that Assad would eventually move to crush rebels in Idlib province, and receive Rusian military support while doing so.

Sébastien Roblin writes on the technical, historical and political aspects of international security and conflict for publications including The National Interest, NBC News, Forbes.com and War is Boring. He holds a Master’s degree from Georgetown University and served with the Peace Corps in China. You can follow his articles on Twitter. This article first appeared earlier this year and is being republished due to reader interest.