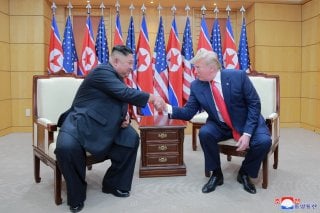 One could be tempted to look back at the record of Donald Trump’s first term regarding North Korea to predict the contours of his second. But given that the president prizes his unpredictability, can we be so sure that the former will tell us much if anything about the latter? A second term would free Trump from the constraints that may have worked in his first term to limit the worst parts of his personality to secure re-election. Furthermore, the Trump-Kim relationship is inherently interactive, so predicting Trump’s behavior requires predicting Kim’s. While predictions regarding North Korea are problematic at the best of times, predictions regarding a 2021 Trump-Kim relationship are fraught with high error terms. Perhaps also worth flagging is the prospect that North Korea might figure in President Trump's plans to secure re-election. The prospect of an October surprise involving North Korea might be more the stuff of a movie. But the president’s longest-serving national security adviser flagged this as an admittedly unlikely possibility recently. So it should not be completely dismissed.

The above considerations notwithstanding, I predict that President Trump’s strategy towards North Korea in his second term would build on his initiatives in his first. Many commentators, myself included, worried that President Trump wanted a deal with Kim that would essentially eliminate North Korea’s long-range nuclear missile systems capable of targeting the United States but allow North Korea to maintain those medium and shorter-range ones capable of targeting Japan, South Korea, U.S. bases in the region and other targets. Such a deal, in theory, would at least in the short term promise to enrich U.S. security by taking the North Korean capability to target the U.S. homeland with nuclear weapons off the table. For these reasons, it might prove popular with large segments of the U.S. public.

But as usual, the devil is in the details. First, verification and probably moderate to extensive arms control are required to ensure that North Korea upholds its part of this bargain. This was and is never going to fly given North Korea’s intense insecurity and secrecy regarding its nuclear infrastructure and weapons systems. So if this deal was done it would have been one-sided from the beginning. But second, even if the arms control and verification problems could somehow be solved, but especially when they cannot, this deal sends signals to Seoul and Tokyo that the United States is now willing to bless a nuclear North Korea. Much ink has been spilled on various nuclear proliferation tipping points, but this might be the best bet to cause South Korea and Japan to reconsider the nuclear option. After all, Trump did signal that he wanted to bring U.S. troops currently in Korea and perhaps Japan home. This would fit with this strategy but come close to throwing Washington’s longstanding alliances with Tokyo and Seoul under the bus.

It could be that a Biden term will be quickly met by a North Korean missile test but that a Trump term will be met by a less provocative challenge to signal to Trump that Kim wants the previous diplomacy to continue. In that case, if it doesn’t, a more provocative test will follow. However, Kim may miscalculate and authorize too provocative a challenge that Trump will respond to in a way that takes diplomacy off the table and may spark a dangerous crisis. But I predict that given that Kim and Trump would both want the above deal they will both strive to find a way to make it happen. The result will upend whatever geopolitical stability remains in the Indo-Pacific.

Michael D. Cohen is is a senior lecturer (assistant professor) at the National Security College of the Australian National University’s Crawford School of Public Policy. He is author of When Proliferation Causes Peace: The Psychology of Nuclear Crises and is co-editor of North Korea and Nuclear Weapons: Entering the New Era of Deterrence.