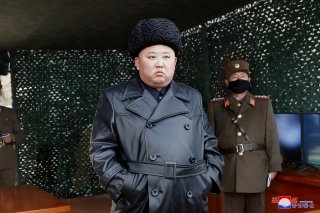 Former President Donald Trump transformed the Korean dynamic when he met with North Korea’s Supreme Leader Kim Jong-un in 2018. Their dramatic Singapore summit raised expectations, which were dashed by the failure of their second meeting the following year. The Kim regime then essentially abandoned negotiations, engaging in only a couple of desultory rounds of talks before Trump left office.

The incoming Biden administration pressed Pyongyang to resume contact even while reviewing U.S. policy toward the Democratic People’s Republic of Korea. So far the DPRK has refused. Indeed, in response to the coronavirus pandemic, the North engaged in self-isolation, sending home most foreigners, from NGO workers to diplomats.

The country may be headed for another famine as Kim warned of a “food crisis” and another “arduous march,” as during the 1990s. The regime also has launched a harsh campaign against foreign influences. The regime is arresting and imprisoning citizens, including children, who view and share foreign entertainment, especially South Korean entertainment. With Chinese support, which most likely has helped keep the country afloat, Kim appears determined to persevere alone with North Korea’s borders closed in the coming months or even longer.

The North poses multiple challenges to the United States and its Northeast Asian allies. Most obvious is the security threat: seven decades ago the DPRK invaded the South, triggering the brutal three-year-long Korean War. A uniquely Korean cold war followed, which has occasionally turned hot.

Pyongyang magnified the North Korean threat in the 1990s with its nuclear weapons program. Successive U.S. presidents insisted that the DPRK could not be allowed to have nukes, yet by one estimate the North now may have enough nuclear material for sixty weapons. If production continues, then that number could be in the hundreds in just a few years. With nuclear-tipped missiles, Pyongyang is capable of striking well beyond the Korean Peninsula, including the United States.

Unsurprisingly, North Korea has an awful human-rights record. For the North, politics is religion and the Kim family is divine. Criticism is apostasy. The State Department provides a long list of human-rights violations, as in, essentially none are respected by the regime. Pyongyang is almost unique today in the brutality with which it treats political nonbelievers: labor camps hold tens of thousands of prisoners. Three generations are punished for individual transgressions. With unique malevolence, the DPRK combines poverty and oppression.

The extraordinary hardship afflicting the North Korean people has resulted in significant criticism of Washington’s emphasis on security issues. Passionate activists advocate making human rights a priority. Although their plea is emotionally powerful, the U.S. and allied countries have no more leverage to force Pyongyang to liberalize than to denuclearize. The virulence of repression has waxed and waned throughout the North’s more than seventy years of existence, but never in response to outside pressure.

Moreover, liberalization is less likely without denuclearization than the latter is without the former. A North Korean ruling regime that feels insecure enough to require nuclear weapons isn’t likely to feel secure enough to halt repression, which remains the foundation of the Kim dynasty. Convince Pyongyang that it is better off without nukes, or at least with fewer of them, and it might also decide that it can survive without filling a gulag.

However, if the DPRK is unwilling to engage on the topic of nuclear weapons, then the United States and South Korea should begin talking about human rights in the North. The message should be simple: regional security in Northeast Asia requires engagement. If Kim Jong-un is unwilling to talk about the most fundamental destabilizing issue of nuclear weapons, then the allies will address foundational issues, in this case, the nature of the Kim dynasty.

Such a stance would require a policy change by the Republic of Korea. It has long been a paradox of ROK politics that the strongest human-rights advocates at home are the weakest promoters of human rights abroad, as in North Korea. Equally notable is the silence of President Moon Jae-in. “Moon may have a reputation as a human rights lawyer, but he has stayed mum on North Korean human rights and has not carried out two key aspects of a human rights act enacted some five years ago,” according to an op-ed written by Dylan Stent and published by NKNews. Indeed, Moon’s government essentially acted on Pyongyang’s behalf by targeting human-rights groups, threatening them with deregistration and prosecution for seeking to inform and assist the North Korean people.

Actively doing the Kim regime’s dirty work is morally appalling. Also, it is practically foolish. Dialogue over human rights should always be an objective of allied relations with the DPRK, even if it’s not the top priority. Treating the issue as a secondary concern can be justified if an acrimonious yet unproductive battle over the North’s domestic practices might disrupt nuclear or other arms negotiations. However, if Washington and Seoul face a security stonewall, then they should move onto other issues, especially one, like human rights, which North Korea finds threatening.

Moon, a genuinely courageous human-rights activist, apparently believes that Pyongyang will make concessions if the South preemptively suppresses anything that might trouble the Kim regime. Hence Seoul’s attempt to limit those who criticize the nature of the DPRK regime and communicate with the North Korean people. He gets the issue entirely wrong.

Although Kim’s Swiss prep school experience may have given him an appreciation of the importance of market economics to development, it did not turn him into a political liberal. Rather, given his dalliance with the Chicago Bulls and Disney, Kim likely gained an appreciation for the powerful appeal of Western culture and the resulting threat to his regime. He fears not just freedom but freedom’s fruits as well.

So the United States and, more importantly, South Korea should send an unmistakable message to the North’s Supreme Leader: pick up the phone to talk about the security issues that are most concerning to us or we will do a lot more than use the phone to reach your people. Instead of helping Kim keep his people in check, the allies could make him pay a price by helping enlighten them.

No one knows how Kim would react. However, there is little downside to more aggressively pushing human rights. The regime is weak, facing enormous economic pressure at home, including, it appears, potential famine. There is no diplomatic dialogue to disturb. And, perhaps under Chinese pressure, Pyongyang has avoided any recent military provocations despite the breakdown of negotiations with the United States, which might have threatened a return to “fire and fury.” The more reliant Kim is on Beijing’s largesse, the less likely he is to create a military crisis. Thus, this is an opportune time to make him pay a price if he remains recalcitrant.

The Trump administration opened up the possibility of a deal with North Korea, but the latter’s turn inward leaves the United States and South no obvious way to make progress toward limiting, let alone eliminating, the North’s nuclear weapons and program. The allies need to find another means by which to pressure the DPRK to engage. Talking about human rights would turn a moral imperative into a practical political tool.

Doug Bandow is a Senior Fellow at the Cato Institute.  A former special assistant to President Ronald Reagan, he is the author of several books, including Tripwire: Korea and U.S. Foreign Policy in a Changed World and co-author of The Korean Conundrum: America’s Troubled Relations with North and South Korea.