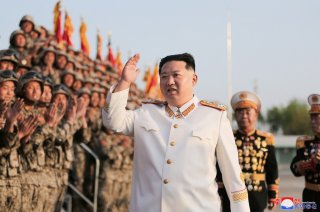 North Korean supreme leader Kim Jong-un has deployed the country’s military to Pyongyang to stabilize the country’s meager supply of essential medicines—a deployment that follows the North Korean government’s announcement of an outbreak of COVID-19, allegedly its first.

Kim blamed the issues on the North Korean bureaucracy, claiming that “officials of the Cabinet and public health sector in charge of the supply have not rolled up their sleeves, not properly recognizing the present crisis but only talking about the spirit of devotedly serving the people.” He ordered the “powerful forces” of the army’s medical corps to “immediately stabilize the supply of medicines in Pyongyang City.” Kim reportedly visited a series of pharmacies in the capital to ascertain what supply problems existed and how to solve them. During his tour, Kim allegedly claimed that the pharmacies’ drug storage areas were insufficient to distribute medicine to the city’s residents.

The current outbreak of the Omicron COVID-19 variant has already killed fifty North Koreans, according to government statistics, and may have infected hundreds of thousands of others. As Pyongyang claimed until last week that it was entirely free of coronavirus, the country lacks mass testing capabilities, meaning that it is unclear how widespread the disease is. At the beginning of the pandemic, which originated in neighboring China, North Korea locked down its northern border in an attempt to keep the virus out. However, it is almost certain that smugglers have passed through the closed border, raising the possibility that previous coronavirus strains may have circulated in North Korea without being reported.

Because of the country’s isolation and claims to be free of COVID, almost no North Koreans are vaccinated against the virus. The North Korean government has repeatedly refused offers of donated vaccines from China and the international community.

As North Korea grapples with an Omicron outbreak, China, which has maintained a “zero-COVID” policy since the onset of the pandemic, is struggling to contain its own. Omicron is far more transmissible than any previous strains, although some evidence suggests that it might be less dangerous, particularly to vaccinated individuals.