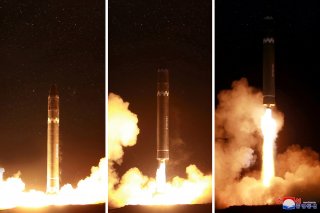 In the midst of a world engulfed in pandemic, economic meltdown and distracting speculation over Kim Jong-un’s health, we are in danger of missing two new crises to come: (1) an overwhelming cycle of disease and famine in North Korea; as well as (2) a seventh North Korean nuclear weapons test.  Both possibilities ominously signal what we don’t need more of — major instability in Northeast Asia which risks miscalculation and possibly war.

As a former State Department official, I bore witness through cables and media reports to the North’s 1990’s famine, and during official trips to Pyongyang, I saw the heavy toll of mass starvation on the faces of Pyongyang’s residents. Reportedly millions died. As a second-generation Korean-American, I promised myself then that I would not let another similar tragedy unfold without sounding the alarm.

Pyongyang has proudly declared that it has no COVID-19 cases. Few believe this is true. Even with comprehensive social distancing and draconian quarantine measures, we know that viruses respect no borders. So even taking the regime’s assertions at face value, it is only a matter of time before the disease mounts its own kind of invasion.

In the case of COVID-19, North Korea’s citizenry is particularly susceptible to a devastating outbreak. Decades of malnutrition have left the population’s health and immunity compromised. North Korea’s persistently high rates of respiratory diseases like tuberculosis show the country is not capable of dealing with these types of sicknesses at any scale. Where international sanctions are stringent and the economy sputtering, domestic shortages are chronic -- the country will have few personal protective equipment (PPE), ventilators and other medical basics. Rather than request international assistance, its mistaken priority to keep the country under control will likely delay an effective response until it is too late.

To make matters worse, North Korea may soon be facing more food shortages. The challenge is daunting even in normal times. But during a pandemic, who will plant, harvest and process badly needed grains if all are sheltering or ill?

When faced with a crushing combination of large-scale malnutrition and COVID-19, the regime will do what it always does when it doesn’t have proper tools — it will triage. North Korea will devote precious resources to its privileged and not to everyday North Koreans, leaving them to simply die either from disease or lack of food. Regardless, the loss in human life could be shocking and threatening to the regime’s very existence.

Adding to this morass is the high likelihood that North Korea will test another nuclear device.  Here’s why:

First, Kim Jong-un was embarrassed by last year’s summit in Hanoi because the North’s leaders had high expectations for concrete gains (like sanctions relief); yet nothing came. Relations with the U.S. are dead. Kim’s highly publicized remarks in December 2019 have arguably rejected diplomacy while simultaneously bracing the country for greater hardship and possible provocations. With a population under pressure, Kim will do what many political leaders do when stressed, internally rally his country by touting an outside threat.

Second, the North’s leaders are skilled at making the country’s weakness an asset, usually by resorting to nuclear extortion to draw international benefits. We can expect more of this. More troubling, however, is North Korea’s tendency to double down and show “strength” during unusual internal turmoil – usually in the form of a deliberate warning to adversaries to back off and leave the country alone. If Kim Jong-un is ailing or dead, then this incentive becomes even greater for those in charge and a nuclear test more certain.

Third, there is a technical imperative. To produce a truly operational nuclear device, North Korea must test again. Undoubtedly, its military is aggressively lobbying for another test because it sees a nuclear weapon as the best guarantee against invasion and attack.

Finally, there is perhaps a no better time to conduct a test than this year. Governments around the globe are mired in and distracted by a pandemic and the prospect of world-wide depression. Ever opportunistic, the North could very well calculate the international political costs of a nuclear test as minimal.

So what do we do?

Having contained COVID-19, South Korea has the means and know-how to help the North; its President Moon Jae-in, the will. The U.S. needs to set aside differences with the South over security costs and fully support upcoming peace and humanitarian initiatives that are sure to come. The U.S. must then work with the WHO and others, like Japan, Russia, and China, to put together a comprehensive approach that will augment South Korean efforts. While a decision to conduct a nuclear weapons test or some other provocation is solely up to North Korea, there is a small chance, and one worth taking, that American willingness to help the North during a time of dire need may create an opening to somehow persuade the North to forego a test. Lastly and perhaps most importantly, the U.S. must lead. We can’t do everything, nor should we, but our role in the world, I believe, remains essential.

We will know soon enough what is going on with Kim Jong-un. However, for now, one thing is very clear.  North Korea is on the precipice of crisis -- from wide-spread illness and starvation or from a nuclear provocation that escalates into a disastrous miscalculation. We can choose to ignore past lessons when perhaps millions died before in North Korea, but I cannot.

Philip Yun is President and CEO of World Affairs. Previously, Mr. Yun was Executive Director and Chief Operating Officer of Ploughshares Fund. Prior to joining Ploughshares Fund, he was a vice president at The Asia Foundation (2005-2011), a Pantech Scholar in Korean Studies at the Shorenstein Asia Pacific Research Center at Stanford University (2004-2005) and a vice president at the private equity firm of H&Q Asia Pacific (2001-2004). Mr. Yun was a presidential appointee at the U.S. Department of State (1994-2001), serving as Senior Advisor to the Assistant Secretary of State for East Asian and Pacific Affairs. During this time, he also worked as a senior advisor to two U.S. Coordinators for North Korea Policy -- former Secretary of Defense William J. Perry and former Under Secretary of State Wendy Sherman. Mr. Yun was a member of a government working-group that managed U.S. policy and negotiations with North Korea under President Clinton and was part of the U.S. delegation that traveled to North Korea with Secretary of State Madeline Albright in October 2000.