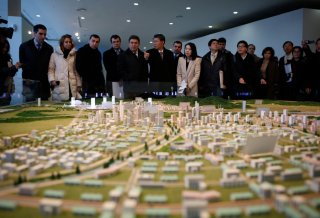 One problem with progressivism is the tendency to believe that everyone is basically decent and nice. And with the proper instruction—maybe just a good talking to, pointing out their mistakes—they can be raised to a higher, more perfect level. So it is with South Korean liberals and their view of the Democratic Peoples Republic of Korea (DPRK).

Earlier this month Song Young-gil, head of the Republic of Korea’s Democratic Party, offered an industrial park and hamburgers as answers to potential conflict between North and South Korea. He first argued that “The Kaesong industrial complex (KIC) has a very essential role in easing tension between the two Koreas and is a very, very efficient way to change North Korea.”

Of course, the KIC did not bring peace and stability to the peninsula when it opened in 2004 and was always subject to political currents in Seoul and Pyongyang. The Republic of Korea (ROK) suspended operations in February 2016 after the North’s nuclear test and satellite launch, which was widely viewed as a sub-rosa missile test. The DPRK then expelled South Koreans from the zone. The KIC has been idle ever since, despite occasional proposals to reopen it. Subsequent sanctions have made restarting operations even more difficult.

Although reopening Kaesong would give Seoul something to offer North Korea, economic cooperation alone will not remake the North. The project expanded during progressive Roh Moo-hyun’s presidency. Yet nothing much was resolved between the two Koreas, even though Roh held a summit with North Korea’s Kim Jong-il. Two conservative ROK presidents followed and bilateral relations tanked. In 2013 the DPRK suspended activity at the KIC; though the zone reopened a few months later, the South closed it after complaints that the hard currency earned was indirectly underwriting Pyongyang’s missile and nuclear programs.

Seoul should use Kaesong as a carrot but have modest expectations. The U.S. should work with the South to add sufficient flexibility to both American and United Nations sanctions to enable the industrial park’s reopening. Then the ROK should incorporate that possibility into a larger engagement initiative, but one also requiring North Korean concessions. To unconditionally open Kaesong’s doors would give Pyongyang a benefit that it would pocket, before demanding even more. Consider the fate of the liaison building constructed by Seoul.

Through everything, it is important to see the North plainly. Kim Jong-un is different from his father and grandfather: he wants economic development, is good at international diplomacy, and has a greater familiarity with the West. That does not make him a liberal, however.

Kim is no reformer like Mikhail Gorbachev, instead having ruthlessly executed anyone he perceived to be a threat to his power—including his uncle, who was believed to support a greater opening to the outside world. And though the events of 2018 gave great hope that a new era on the Korean peninsula had arrived, the DPRK has since sealed out the world. No doubt, the COVID-19 pandemic was an important factor. However, of late Kim has reversed course on economic reform and waged war against South Korean cultural influences. That suggests he has moved closer to Kims père and grand-père in viewing progress as a threat to his rule. ROK progressives, in particular, should temper hopes for any dramatic opening of the North, irrespective of Kaesong’s role. Especially since Kim is likely to take note that even his country’s supposed “friends” in the South hope to use the KIC to transform the North to his detriment.

Nor is the business park likely to do much to increase the DPRK’s faith in its interlocutors, which obviously would be necessary for any meaningful disarmament, let alone denuclearization, by the North. Song contended “that reopening the Kaesong industrial complex is a very critical point to building trust between the United States, South Korea, and North Korea.” Indeed, he seemed to fixate on America’s premier burger joint: “Can you imagine, if a McDonald’s store is located at the Kaesong industrial complex, it could be a strong symbolic sign that the United States does not have an intention to invade North Korea.”

The best that can be said about his argument is that the New York Times’ Thomas Friedman once made a similar claim, that countries with McDonald’s never went to war with each other. He was factually wrong—the U.S. bombed Belgrade, where the burger chain operated, and since then there have been additional cases. More important, causation and consequence are different. U.S. investment is simply more likely in nations which Washington is less likely to bomb or invade. Kim almost certainly understands that, even if Song does not. The presence of McDonald’s wouldn’t prevent the U.S. from launching a preventive war, striking the North’s nuclear facilities, or attempting regime change.

This suggests that the no doubt well-intentioned Song should redirect his search for solutions. The ROK must deal with North Korea as it is, not as most everyone around the world wishes it would be. That should mean, first, creating an adequate military deterrent. This is the most basic responsibility of any state, whether run by conservatives or liberals. And if Seoul wants to make its own decisions in its own interest, it cannot forever rely on the U.S., in which many people are tired of subsidizing well-heeled allies and which will face increasing domestic financial strains.

Second, the South should develop a program directed at the real DPRK, a totalitarian state whose leader wants greater economic and diplomatic integration in the world but evidently fears the impact on his rule. It won’t be easy to thread the needle, but it is vital that South Koreans understand what and who they are dealing with. Kaesong might be one piece of the puzzle, but it is only one, and a fairly small one at that. Whether McDonald’s comes or goes isn’t likely to matter.

Next year’s presidential election could yet again result in a dramatic change in the South’s political direction. Relations with North Korea will be a vital issue, as always, and will present a difficult challenge to whoever wins. If that is Song’s progressives, they need to recognize that Pyongyang’s leadership is not like everyone else. And make policy accordingly.