South Korea Is Charting an Independent Course on China 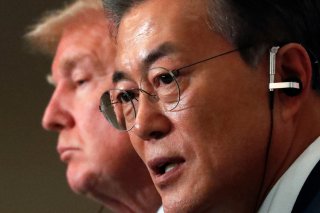 Originally Beijing only recognized communist North Korea. In October 1950 Mao Zedong’s People’s Republic of China (PRC) intervened in the Korean War, saving Kim Il-sung’s government from defeat and preserving the Democratic People’s Republic of Korea (ROK). Nevertheless, the two governments were not particularly friendly. Indeed, Kim was embarrassed by his wartime dependence on China. Amid the oscillations of the PRC’s relations with North Korea came notable low points: Kim’s purge of the pro-China faction of the North’s communist party and Beijing’s criticism of the North’s evolution into a quasi-monarchy.

Official contacts between South Korea and the PRC began in the 1980s. However, Seoul’s ties with China did not warm significantly until the end of the Cold War. In 1992 the two nations established diplomatic relations. Since then trade and investment burgeoned. Today the PRC trades more with the South than America and Japan combined.

Until 2016 the bilateral relationship seemed destined to grow ever closer. However, the South ignored Beijing’s opposition to the deployment of THAAD missile defense and imposed economic sanctions in response. Although mild by U.S. standards, they imposed a real financial cost on the ROK. However, the reputational loss by China was even greater. South Koreans had viewed the PRC positively, but its approval numbers plummeted after the THAAD controversy. The South’s population became much more suspicious of Beijing’s objectives and more supportive of defense ties with America.

Although the two governments formally repaired their relationship, China had lost the ROK public’s hearts and minds. Since then, whatever hope the PRC had of regaining its earlier popularity faded with its worsening human-rights practices and increasingly aggressive international activities.

Yet Seoul is not interested in becoming an enemy of China.

It has been long evident to the South Korean government that the United States does not believe in equal partnerships. As in other alliances, Washington believes that it makes the rules. Even though the ROK has become a serious global power—breaking into the top dozen economies, for instance—the United States treats the South as if it was little changed from the war-ravaged, authoritarian, economic wreck of 1953.

Unsurprisingly, Washington is demanding that Seoul follow the former’s lead on the PRC. Explained the South China Morning Post: “Being caught in the middle of rivalry between the US and North Korea is a decades-old problem for South Korea and now it also has to contend with Sino-American animosity. The presence of tens of thousands of US troops on its soil since the 1950-53 Korean war as a bulwark against North Korean aggression is also a source of tension with China. Washington’s pressure for Seoul to host an anti-ballistic missile defense system angered Beijing due to its surveillance capabilities and although that issue has largely been resolved, there are now demands from the Trump administration to deny Huawei and other Chinese technology firms integrated circuits. With China being by far South Korea’s biggest trading partner, acceding to such a demand is difficult.”

Today the ROK is under increasingly intense pressure from the Trump administration to join the administration’s election-themed campaign against the PRC. So far, the Moon Jae-in government has resisted, opposing the ban on semiconductor sales to Huawei and other Chinese firms and refusing to denounce Chinese policy in Hong Kong, for instance.

The response from Washington has been standard Trump: make additional and more insistent demands, rather like the so far failed attempt to dragoon European governments into the administration’s program of “maximum pressure” against Iran. ROK diplomats express frustration at the failure of U.S. officials to acknowledge how the administration approach threatens their own country’s interests. However, American hubris comes naturally: Washington always has controlled the agenda with North Korea and expected the South to unthinkingly follow American directions.

That Seoul seeks to set its own policy has shocked hawkish analysts who assume confrontation is the best and only sensible policy toward the PRC. For instance, Mathew Ha of the Foundation for the Defense of Democracies blamed the South’s failure to adopt the Trump agenda on fear of Chinese retaliation, which he believed should be addressed through bribery, a promise to reimburse Seoul for any costs incurred. He warned of “China’s hand” and “Beijing’s sway,” which he saw involved in a nefarious attempt “to undermine U.S. alliances.” Obviously, the South Koreans were incapable of thinking and acting for themselves.

Ironically, also attempting to undermine the U.S.-ROK alliance, if not the rest of America’s alliances was Japan’s Prime Minister Shinzo Abe. Locked in a bitter feud with the South over lawsuits seeking compensation for war-time abuses, Tokyo saw an opportunity for advantage. Reported the Japan Times: “Tokyo has told Washington it opposes a suggestion by U.S. President Donald Trump to add Seoul to the Group of Seven summit, diplomatic sources said.  . . . The message, in which Tokyo claimed Seoul is out of lockstep with G7 members on Chinese and North Korean issues, was conveyed by a high-level Japanese government official immediately after Trump on May 30 broached the idea” of inviting the ROK to attend. In Japan’s telling, failing to be Washington’s catspaw means Seoul must be Beijing’s catspaw!

Korea long has been known as a shrimp among whales, given the proximity of China, Japan, and Russia. The United States seemed like almost the perfect ally for South Korea since the former was far away, and thus less likely to attempt to physically dominate the South. However, while the ROK understandably leans toward Washington, that does mean South Korea wants to create an enemy in Beijing. In April National Assembly speaker Moon Hee-sang said that asking the ROK to choose between China and America was like “asking a child whether you like your dad or your mom.” He explained: “We cannot abandon economy for the sake of security, and we cannot abandon security for the sake of economy.”

This isn’t the first time that Seoul has felt pressure to choose between the two countries. However, the South’s priority is to not turn the PRC into a permanent adversary. China will always be next door and has a very long memory. During the THAAD deployment, noted Chun Yung-woo, national security adviser to President Lee Myung-bak, South Koreans learned “how harsh [the Chinese] can be in dealing with their small neighbors and how hollow their commitment to a peaceful rise actually turned out to be.” Imagine the PRC’s reaction if Seoul aided an enemy power that attacked China. And should the Washington-Beijing confrontation turn violent, the result easily could be more than one war. After all, it took two global conflagrations to determine Germany’s role in the world and its relationship with other great powers. Beijing would not easily or quickly yield its ambitious objectives.

Washington’s arrogant assumption that the South would, of course, join with America against China is reflected in long-standing arguments that the United States should maintain troops on the Korean Peninsula in order to contain the PRC, without asking whether Seoul would approve their use for that purpose. I have yet to meet a South Korean official who endorses that assumption. Publicly the government ignores the hypothetical, though President Roh Moo-hyun indicated that his government’s approval would be necessary for Washington to use forces based in the peninsula, which meant that he was prepared to say no.

The only scenario under which Seoul likely would allow the United States to wage war on China is if America’s forces were defending the South. Moon Hee-sang argued that South Koreans across the ideological divide wanted to avoid involvement in a fight between the big boys “unless our survival is at stake.” The likelihood that the South would aid America in fighting China over Taiwan, Japan’s Senkaku Islands, or the Philippines’ Scarborough Shoal approaches zero.

The ROK won’t be the only friendly nation, even ally, to refuse Washington’s attempt to conscript it against China, especially in making bombastic attacks on the PRC like the one that Secretary of State Mike Pompeo launched last week. Such attacks will do little more than anger Beijing. But then, that likely was the secretary’s goal, hoping to goad China into making a useful political response.

In fact, South Koreans should be skeptical of a blatant campaign effort launched by Trump, who spent three years lavishing praise on Xi Jinping, the architect of growing repression at home and aggressiveness abroad. If the Trump administration botches this effort, which will likely happen considering the failed campaigns against its other adversaries—most obviously, Cuba, Iran, Russia, Venezuela—South Korea doesn’t want to end up as a permanent target of Chinese ire as a result.