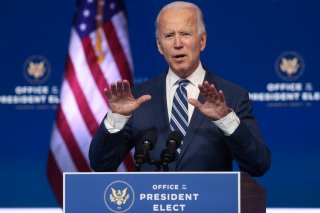 There are many analyses on the different approaches that President Donald Trump and presumptive president-elect Joe Biden will take toward North Korea. We know that Trump took a less ideological approach and negotiated directly with the country’s autocratic leader, Kim Jong-un, focusing mainly on U.S. interests. It is likely that once Joe Biden takes office, North Korea will be treated in more moralistic, cosmopolitan terms: the benefit of North Koreans living under brutal dictatorship will also matter, not just U.S. interests. However, there has been limited analysis of how North Korea will react to the change of U.S. foreign policy leadership.

Most analysts make the mistake of assuming that North Korea operates on the basis of assumptions that the West feels justified. They assume that North Korea sees the United States as a nonthreatening force for a legitimate, rule-based international order. That means they assume that the country’s defiance of such rule is opportunistic behavior that North Korean leader, Kim Jong-un knows to be illegitimate. Nothing could be further from the truth.

North Korea has historically seen U.S. behavior as illegitimate and illegal. Thus, threats and punishments have been the very reason for defiance, independent defense and, indeed, nuclear deterrence. North Korea’s former foreign minister, Ri Yong-ho, issued a statement that reflected this analysis: For him, a nuclear weapon "is a legitimate option for self-defence in the face of clear and real nuclear threat posed by the US against the DPRK . . . While the nuclear-weapon states have never been under any military attack, non-nuclear states such as Grenada, Panama, Haiti, Former Yugoslavia, Afghanistan, Iraq, Libya and Somalia underwent regime change by the military attack and interference of the US . . . Our nuclear force is a war deterrence to put an end to the nuclear threat of the US and prevent the military invasion of the US.” All this may be untrue, but since it is how North Korea perceives the world, then it is the frame that North Korea’s policy stems from.

It is notable that Biden will not change the basic parameters of U.S. punitive deterrence against North Korea. Regardless of whether Kim Jong-un sees the threat of a defeating punishment in case North Korea attacks U.S. forces or its allies, this will ultimately take away any temptation the country might have to launch a military attack.

The difference here, as the power transfers from Trump to Biden, is whether Kim has more reason, within his own framing of the world, to believe that Biden’s United States will punish North Korea even in absence of the ultimate North Korean provocation. Given the attacks, and “regime changes” that Yong-ho lists above, it’s clear that the former foreign minister implicates all previous presidents, Barack Obama (Libya), George W. Bush (Afghanistan, Iraq, Somalia 2007, Haiti 2004), Bill Clinton (Yugoslavia, Haiti 1993, Somalia 1992-3), George H.W. Bush (Panama), Ronald Reagan (Grenada), except Trump. For these reasons, North Korea may feel more intimidated by the risk of an attack in absence of North Korean military provocation during Biden’s term. However, yielding under the U.S. pressure towards verified permanent nuclear disarmament may also be difficult for North Korea given the precedent of Trump’s withdrawal from the 2015 Joint Comprehensive Plan of Action and continued punitive sanctions against Iran. Why should North Korea let U.S. pressure persuade itself to a permanent destruction of its nuclear weapons if the United States may still punish the country?

The question of national pride, defense of the regime, Biden’s presidency, and his more moralistic approach, may also add to the pressures on the North Korean regime. After all, Biden called Kim Jong-un a “thug” and compared him to Adolf Hitler in the presidential debates. Undoubtedly, Hitler should have been removed from power before his atrocity crimes. Thus, if Kim Jong-un analyses this perception, he will have to assume that Biden might aim for a regime change in North Korea. According to the analysis of South Korea’s president’s adviser Moon Chung-in and Ildo Hwang, the “DPRK is willing to sacrifice against its economic and even security interests if the supreme leader's esteem and honor are at stake.” This could explain the anticipation of North Korean provocations during the first days, weeks and months of Biden’s presidency by many North Korean experts.

North Korea’s personalistic leadership may also make it difficult for Biden to build trust between the two countries, given Biden’s commitment to a more institutionalized and bureaucratic approach to foreign policy. The fact that Trump could not trust the loyalty of his own foreign affairs bureaucracy made him an optimal negotiator with Kim Jong-un. He had to rely on his personal diplomacy and this was matched by North Korean realities. In that country, only one person in charge, Kim Jong-un, and thus, building trust between bureaucracies makes little sense.

Finally, the political tide is turning against compromises both in the United States and in North Korea. The South Korean administration managed, temporarily, to mobilize political support for peace and compromise by using political publicity, media campaigns in a strategy of “frontloading peace dividend.” This strategy aimed to appease Trump and Kim and boost their political support by suggesting that they were about to succeed in something their predecessors could not do. For this to work, photoshoots should have been followed by tangible results between the United States and North Korea, not just between the two Koreas. Since success did not materialize, North Korea’s negotiating foreign minister was replaced by a military hardliner, Ri Son-gwon. Meanwhile, in the United States, Biden felt he needed to compare Kim with Hitler to gain popularity. Since the frontloading of the peace dividend strategy was personalistic and tied to Trump and Kim, Biden will have to start his term with little benefit from his predecessor’s progress.