Americans Must Face the Hard Truth on Afghanistan 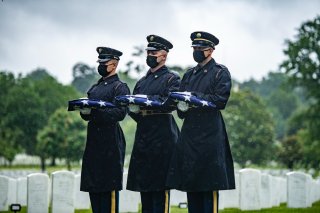 One year ago, the Afghan government and military disintegrated in one of the most remarkable, sudden, and widespread collapses in modern military history. Looking back, not just at the year since that collapse but the twenty years that preceded it, there are some important lessons for the United States to acknowledge. Key among them: foreign interventions to “promote democracy” and “fight terrorism” have been exposed as expensive failures. We fail to apply these lessons to our future peril.

Just before midnight in Kabul on August 30, 2021, Maj. Gen. Christopher T. Donahue, commander of the 82nd Airborne Division, left the tarmac to board a U.S. C-17 military transport, becoming the final U.S. servicemember to leave Afghan soil. After twenty years of blood, sacrifice, and futility, the American military had withdrawn from Afghanistan—with the victorious Taliban watching from the Kabul government buildings they had captured.

As one who deployed to Afghanistan over the course of two combat tours, watching the mission literally disintegrate before my eyes last August was a bitter pill, to say the least. Especially during my 2010-2011 combat deployment, I had traveled thousands of miles throughout the areas in northern, eastern, central, and southern Afghanistan where U.S. Army troops had been operating. I met hundreds of U.S. and allied soldiers and scores of Afghan citizens and military personnel.

Like nearly every American sent to Afghanistan, I had hoped to be part of something that would bring peace to the people of Afghanistan, who had by 2010 already suffered under forty consecutive years of one war or another. Yet as I had identified as early as 2009, the strategies, objectives, and plans the United States tried to employ in pursuit of helping Afghanistan win were so deeply flawed that failure was almost baked in.

For example, in a 2010 essay I wrote in the Armed Forces Journal, I pointed out that it was already obvious our efforts were failing. I warned that absent a “major change in the status quo that currently dominates in Afghanistan, the U.S.-led military effort there will fail to accomplish the president’s objectives and, despite our best effort to spin it otherwise, we will lose the war in Afghanistan.”

The problems I identified in that essay proved prescient. Too many senior leaders had spent too many consecutive years making optimistic claims of military and governmental success, yet none had been evident on the ground. The history of the Afghan people resisting any foreign military presence—considering outside forces occupiers—had helped fuel the insurgency.

Other foundational problems included a fatally corrupted government in Kabul, an Afghan military that was clearly inadequate for the task of securing the country and unlikely to do so for the foreseeable future, and, most critically of all, the Pakistani sanctuary. Without getting Islamabad fully on board with U.S. strategy and shutting down all support for the Taliban, it would be physically impossible to defeat them.

None of those issues I had raised in 2010 were ever rectified (many others, by the way, had likewise raised similar warning bells). If anything, the problems mounted over the next decade. Compounding the strategic errors, as exposed in the 2019 Washington Post Afghanistan Papers, was a resolute unwillingness to acknowledge plain truth. It was always clear that the government never corrected its severe corruption problem (as graphically evidenced by the fact that the Afghan state the United States created after September 11 never produced a free and fair presidential election; all were marred with massive cheating).

As I discussed at some length in my public criticism of the war in February 2012, I had observed during my 2010-2011 combat deployment that the Afghan National Security Forces had not made any progress since my 2005 deployment, and there was fundamentally no reason to believe that would change. It never did. None of the problems that I and many others identified year after year were ever acknowledged—and therefore they were never resolved.

The plain truth of the matter is that the war was never winnable. There was no “right” strategy to find, no formula that if only we’d have adopted things might have been different, and no amount of troops on the ground would have changed the outcome. Some contend it was reasonable for U.S. forces to have punished the Taliban for their support of Al Qaeda in the smoldering aftermath of September 11. Once that punishment had been meted out, however, the absolute best thing that could ever have happened for U.S. national security would have been to withdraw.

By the summer of 2002, there was no Taliban and no organized resistance to the formation of a government in Kabul. That was the perfect time to let the Afghan people decide, on their own, what sort of government they wanted, requiring them to figure out how to make it happen. The United States would have still been perfectly capable of taking out any identifiable direct threat to American national security, as it demonstrated by taking out Osama bin Laden in Pakistan, ISIS leader Abu Bakr al-Baghdadi in Syria, and, just last week, Ayman al-Zawahiri in Kabul.

Instead, the United States continued the fiction of believing that with “just a little more time,” “just a little more money,” or “just the right tweak to the strategy,” the outcome could be changed. Despite every report, every sober analysis of the fundamentals, and every observable outcome screaming that the war was always unwinnable, U.S. leaders at nearly every level in the White House and the Pentagon continued to blithely ignore the evidence in search of the unattainable.

Of course, none of those advocates for keeping the war going forever paid any price for their arrogant, presumptuous behavior (in fact many of them still hold highly-paid positions to this day). But 2,443 Americans paid with their lives, another 20,666 were physically wounded, and hundreds of thousands more will carry the plague of suffering from post-traumatic stress disorder and traumatic brain injuries for the rest of their lives.

We must resist the temptation to believe the many architects of the Afghan disaster who try to convince us that “if only” the United States had done this or that differently, the war would have been won. From virtually the opening stages of the war, the fundamentals involved showed that both the war and our nation-building efforts were futile. One can only hope that now, a year after the two-decade disaster culminated, we can accept the truth.