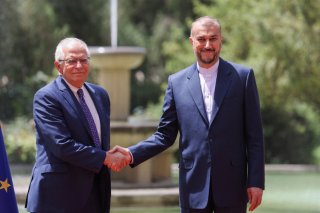 Iranian officials announced on Monday that they were in the process of examining the reported “final text” of the proposed renewal of the Joint Comprehensive Plan of Action (JCPOA), the nuclear deal between Iran and the international community suspending most international sanctions in exchange for Iran’s voluntary suspension of its uranium enrichment. Western and Iranian diplomats returned from Vienna, the venue for the negotiations, to their respective capitals on Monday to consider the draft with their nations’ leadership, according to German state broadcaster Deutsche Welle.

The new “final text” was proposed by European Union representative for foreign affairs Josep Borrell, the international organization’s highest-ranking diplomat and an observer to the ongoing negotiations. Although the precise text of the agreement has not been published, Russian ambassador Mikhail Ulyanov, who leads the Russian delegation to the Vienna talks, broadly summarized it as a renewal of the original JCPOA agreement and claimed that the nuclear deal would be restored if no party objected to the draft. However, Iran’s state-run IRNA news agency claimed that the Islamic Republic was “not at a stage to talk about finalizing a deal,” suggesting instead that Iranian officials would “convey … additional views and considerations after more comprehensive discussions in Tehran.”

Under the original JCPOA, negotiated in 2015 between Iran and the “P5+1”—the United States, the United Kingdom, France, Germany, Russia, and China—Iran voluntarily dismantled many of its centrifuges and exported most of its uranium in exchange for the lifting of most international sanctions. Although some sanctions related to Iran’s ballistic missile program and sponsorship of foreign militias remained in place, the final document was widely hailed in both the West and Iran as a landmark agreement paving the way for an eventual end to hostilities between the United States and Iran. However, the deal was scrapped after only three years; in mid-2018, President Donald Trump withdrew the United States from compliance and reimposed sweeping sanctions on Iran as part of his “maximum pressure” campaign. Following the U.S. withdrawal, Iran initially remained in the accord with the remaining members of the P5+1 but gradually ceased its compliance with specific measures and withdrew altogether after the assassination of Iranian Islamic Revolutionary Guard Corps (IRGC) commander Qassem Soleimani in early 2020.

U.S. president Joe Biden and Iranian president Ebrahim Raisi have each voiced their support for a return to the deal. However, negotiations to restore the agreement have taken many months and repeatedly stalled over contentious political issues. The two leaders have also indicated their willingness to scrap it if the parties could not achieve good conditions. In July, Biden stated that he would rather remain outside the deal than agree to undo Trump’s designation of the IRGC as a terrorist organization.