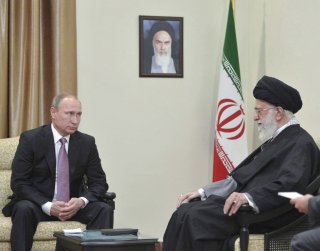 Iranian supreme leader Ali Khamenei reportedly told Russian president Vladimir Putin on Tuesday that the NATO military alliance would have started the war in Ukraine eventually if Russia had not invaded first, suggesting that Iran’s position on the conflict would remain unchanged.

“War is a violent and difficult issue, and [Iran] is in no way happy that civilians get caught up in it, but concerning Ukraine, had you not taken the initiative, the other side would have taken the initiative and caused the war,” Khamenei told the Russian leader, according to a summary of their meeting posted to his official website. The ayatollah also reportedly claimed that NATO was a “dangerous creature” and that it “would know no bounds if the way was open to it, and if it was not stopped in Ukraine, it would start the same war using Crimea as an excuse.”

In his meeting with Khamenei, Putin defended the invasion, describing the loss of civilian life as a “big tragedy” but insisting that NATO was responsible for provoking it.

“Some Western countries had said ‘we’re against Ukraine’s membership in NATO, but we agreed to it under pressure from the U.S.,’ which shows their lack of independence,” Putin said. However, he did not clarify which nations he was referring to.

Putin and Khamenei’s discussion included ways to improve economic ties between Moscow and Tehran, including by attempting to reduce the number of transactions requiring U.S. dollars—a  significant sticking point for both nations, as the United States has imposed heavy economic sanctions on both capitals and largely cut them off from the SWIFT international bank authentication network. They also discussed political issues in Syria, Israel, and the predominantly-Muslim Caucasus region of Russia, according to Khamenei’s website.

The discussion between the two heads of state came on the same day as a trilateral meeting between Putin, Iranian president Ebrahim Raisi, and Turkish president Recep Tayyip Erdogan, during which the three leaders agreed to discuss security developments in Syria. Erdogan has announced his intention to launch a military campaign in northern Syria, targeting Kurdish groups in the area. However, Russia and Iran have cautioned against this move, arguing that it could inflame tensions following several years of relative peace.

In a separate meeting, Putin and Raisi agreed to increase their cooperation on the issue of Syria, where Moscow and Tehran have emerged as the two major foreign allies of Syrian leader Bashar al-Assad.

Putin’s trip to Tehran marks his second time abroad since the beginning of the Russian invasion of Ukraine, following a brief tour of former Soviet republics in Central Asia, and his fifth trip to the Iranian capital while in office.