Isolating the Taliban Isn’t an Option 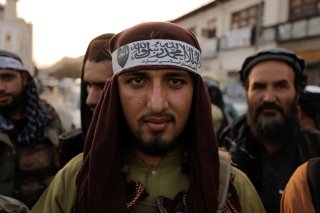 Roughly a year ago, the Taliban was at the top of its game. The organization that sustained an insurgency against the world’s most formidable military power for two decades, losing tens of thousands of foot soldiers in the process, was basking in the glory of victory. Flush with billions of dollars in U.S. weapons meant for the Afghan government, which the Taliban kicked out of power in a ten-day blitz across the country, the group’s fighters were now posing for photographs inside the very aircraft Afghan pilots once used to bomb Taliban positions. “This victory belongs to us all,” Taliban chief spokesman Zabihullah Mujahid bellowed at Kabul International Airport.

But just as President George W. Bush learned after Saddam Hussein’s army was vanquished in a matter of weeks during Operation Iraqi Freedom, the Taliban is now realizing that declaring victory is a lot easier than actually achieving it. The Taliban may be running a government and doing its best to project a sense of force and legitimacy, but the last year of Taliban rule hasn’t been particularly great for the movement. The United States, meanwhile, is still attempting to figure out how to approach the new Taliban authorities, what its policy on Afghanistan actually is, and whether Al Qaeda leader Ayman al-Zawahiri’s presence in Kabul merits a reevaluation.

To date, one gets the notion that the United States and the Taliban don’t have much of a plan. Policy is being made on the fly, and the Afghan people are forced to endure the hardships that result.

Like a trapeze artist on the thinnest of ropes, the Biden administration has tried to balance the necessity of addressing Afghanistan’s dismal humanitarian crisis with the urge to pressure the Taliban government into becoming a more inclusive and less morally repugnant entity. U.S. officials are keenly aware that Afghans are going through incredibly treacherous times. The statistics bear it out; nearly twenty-three million people, more than half of the country’s population, are food insecure. The Afghan economy has contracted by as much as 40 percent since the Taliban came back to power. Universal poverty is conceivable, a consequence of a variety of factors, including Washington freezing Afghanistan’s foreign reserves, the Taliban’s lack of an economic program, and a foreign donor pool that is drying up due to the litany of other humanitarian crises.

The United States has sought to alleviate the economic calamity by throwing aid at the problem, nearly $750 million worth over the last year. The Biden administration also loosened the sanctions regime against the Taliban last December, issuing waivers that permit financial transactions with Taliban and Haqqani-affiliated entities if doing so is necessary in the course of humanitarian work.

Yet if the United States should have learned anything during its two-decade-long engagement in Afghanistan, all the humanitarian aid in the world can’t sustain or create an economy. Doubly so if the U.S. sanctions regime continues to hinder the work of international aid organizations. Addressing the United Nations Security Council on June 23, Martin Griffiths, the UN undersecretary-general for humanitarian affairs, reported that around 80 percent of the aid organizations surveyed by the UN were facing delays in transferring funds to the country to support their operations. Unless the financial industry's self-sanctioning activities are somehow mitigated, Afghanistan will always be struggling to tread water.

A formal diplomatic relationship with the Taliban is a non-starter in Washington and will remain so. The fact that Zawahiri was located next to a home owned by Sirajuddin Haqqani, the Taliban government’s interior minister, will reinforce the doubt in the minds of U.S. policymakers that a business-like relationship with the Taliban can be (or should be) forged. The U.S. position is unwavering: until the Taliban reverses its social restrictions on women, brings ethnic minorities and non-Taliban elements into the government, and clamps down on human rights abuses, the organization will remain ostracized. The possibility that the Taliban will do any of this in the foreseeable future is unlikely, to put it in the most charitable terms.

Yet to its credit, the Biden administration is right to conclude that a policy of pure isolation against the Taliban won’t do anything to meet the primary U.S. security interest in Afghanistan: ensuring the U.S. homeland isn’t attacked by terrorist groups operating on Afghan soil. The United States may not recognize the Taliban, but the Taliban is in fact the authority running the country and has consolidated territorial and political control. Afghanistan’s neighbors, including India and Iran, the Taliban’s chief adversaries the last time it ran Afghanistan, are either exploring a rapprochement with the movement or cooperating on issues of mutual interest. The United Arab Emirates and Qatar, rivals in the Gulf, are also active in Afghanistan and will seek to preserve their own relationships with the Taliban government. In other words, the Taliban is a reality Washington can’t wish away.

In the months ahead, we are likely to see a continuation of the same policy: meeting with Taliban officials when doing so is necessary and prudent (although, post-Zawahiri, the U.S. may place stricter conditions on those meetings), but leveraging economic and diplomatic sanctions in an attempt to coerce the Taliban into adopting more acceptable governing standards. In the interim, Washington will do what it can, in conjunction with its allies and partners, to make the Afghan people’s lives a little less miserable, whether through traditional humanitarian assistance packages or the establishment of a more durable banking system to process financial transactions more expeditiously.

The juggling act goes on.