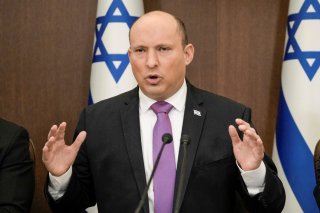 On Tuesday, Israeli prime minister Naftali Bennett told the Knesset, Israel’s parliament, that his coalition would have a “week or two” to resolve its internal disputes or face a dissolution vote that would lead to new elections.

Bennett’s remarks came after Nir Orbach, a member of Bennett’s right-wing Yamina party, indicated on Monday that he no longer supported Bennett’s premiership and would vote with the opposition. Orbach’s defection further weakens Bennett’s government, which has operated without majority support in the Knesset since April.

Although Bennett’s message was optimistic—suggesting that the “week or two” would be used to “settle the problems in the coalition”—he also observed that “we won’t be able to continue” if the coalition’s recurring tensions were not resolved.

Bennett’s government, which marked one year in office on Monday, is composed of a disparate group of parties, ranging from the left-wing Meretz to the right-wing Yamina. It also includes four Arab lawmakers from the Ra’am party, a first for any Israeli government. However, the coalition has come under strain after recent tensions between Israelis and Arabs, including violence at the Al-Aqsa Mosque in April and the killing of Palestinian-American journalist Shireen Abu Akleh in May. These incidents have led Ra’am to threaten to leave the coalition, while right-wing lawmakers, including the two rebellious members of Yamina, have strongly objected to Ra’am’s continued presence.

Bennett’s coalition was formed mainly in opposition to former Prime Minister Benjamin Netanyahu, who governed Israel from 1996 to 1999 and again from 2009 until 2021. Netanyahu, who has continued to serve as leader of the opposition even after his indictment on corruption charges, has allied with Israel’s powerful religious Zionist parties, including Shas, United Torah Judaism, and the Religious Zionist Party—together accounting for 52 of the 120 Knesset seats. So far, fifty-nine lawmakers have remained loyal to Bennett, giving him a slightly larger bloc than Netanyahu. Another six, the members of the Joint List Arab faction, have opposed both groups.

A vote to dissolve Bennett’s government would simply be a majority vote, and his opponents would not be required to put another candidate forward. If a majority of lawmakers opposed Bennett, he would be forced to resign the prime ministership, and a new election would be held—Israel’s fifth since April 2019, illustrating the country’s deep ideological and sectarian divisions.