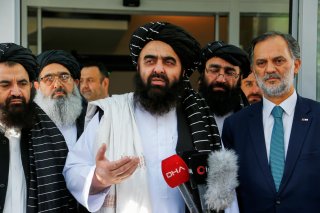 A year since the fall of Kabul and the Taliban’s return to power, the focus of the international community has been on the plight of Afghan women, the escalating humanitarian crisis, and ensuring international financial assistance money does not enrich the sanctioned Taliban and Haqqani Network. The country’s once emerging economy has all but collapsed, and the Taliban have struggled to address a series of challenges, including reports of lawlessness, a devastating earthquake, and repeated attacks by ISIS-K. Since the drone strike in late July that killed Al Qaeda leader Ayman al-Zawahiri, there has also been greater attention to the relationship between the Taliban and the remaining 600 or so members of Al Qaeda in Afghanistan. The policy of the United States and the international community has been little more than to penalize and sanction the Taliban. Yet, unless the United States wishes to treat Afghanistan as a pariah state, there must be a path toward engagement.

As the United States learned on September 11, 2001, a policy of quarantine does not end well. Beyond a counterterrorism concern, Afghanistan is at the confluence of Chinese, Russian, and Iranian interests. Washington’s abandonment of Afghanistan will lead to a bonanza of opportunities for America’s fiercest rivals. In order to survive economically and politically, Taliban-controlled Afghanistan will have few options but to become part of the emergent Sino-Russian axis against U.S.-led Western hegemony. It is a shift that even U.S. ally Turkey and much of the Middle East have considered in recent years as their interests increasingly clash with American policies.

While formal U.S. diplomatic relations with the Taliban are nearly non-existent, the Biden administration has taken steps to restore some semblance of engagement. For example, Special Representative for Afghanistan Thomas West and Special Envoy for Afghan Women, Girls, and Human Rights Rina Amiri traveled to Uzbekistan to attend the International Conference on Afghanistan from July 25-26, with meetings focused on demonstrating support for the Afghan people and human rights as well as holding the Taliban to their commitment to preventing terrorist groups from using Afghanistan to launch future attacks. Undersecretary of the Treasury for Terrorism and Financial Intelligence Brian Nelson joined the delegation for a meeting with the Taliban to “address economic challenges.” Similar ad hoc meetings have been held in Ankara, Turkey, and Doha, Qatar.

Any results from these meetings were undone by the July 30 drone strike on Zawahiri and brought the agreements enshrined in the 2020 Doha agreement to the forefront. By giving shelter to the world’s most wanted terrorist in a privileged Kabul neighborhood, the Taliban flouted the most fundamental promise in the Doha agreement: to prevent Afghanistan from becoming a sanctuary for international terrorist groups, with Al Qaeda at the top of the list. Whatever opportunity for near-term engagement existed before the drone strike has vanished.

To remain relevant in Central Asia, Washington will have to accept certain realities. The Taliban may not have changed much ideologically from the 1990s, but unlike then, today they are better funded, sufficiently supported by regional players, and are in no rush to build bridges with the West. The state of the exiled Afghan opposition is far from united and mobilized. With little to no funding from foreign powers, there is not much the Afghan opposition can do to mount a challenge to the Taliban, aside from waging an information campaign and a few skirmishes on the ground. As such, it is unlikely that they could pose a serious threat to the Taliban or that its government will soon fall, even under a Western sanctions regime. Like Cuba, Venezuela, and Iran, sanctions are painful but survivable.

One key lesson from the failure of America’s democratic experiment in Afghanistan was that it was a mistake to ostracize and vilify the defeated Taliban after 2001. At the Bonn Conference in 2001, the Taliban could have been invited to have a seat at the table. Instead, many were incarcerated at Guantanamo while Afghan politicians, expatriates, and foreign powers charted the future course of the country.

This time, rather than rely upon ostracization or external pressure, a more plausible option is a gradual shift toward more moderate positions among the Taliban as aging ideologues fade from the scene and more practical-minded figures assume prominence. While such moderation may never come about, the United States must play the long game by subtly investing in the moderate elements within the Taliban and encouraging them to become more influential in the decision-making process if possible.

Another consideration is to recognize the inadvisability of imposing a system of governance in Afghanistan that disregards existing traditional and social structures. Conferences on human rights, discussions on female education, and insistence on a broadly inclusive government seem to be nonstarters for the Taliban. They believe that they are the legitimate rulers of the country and feel no obligation to kowtow to foreign moralizing or demands on how to run their affairs. The Taliban are interested in accessing frozen funds, ending the sanctions regime, and gaining international recognition. If there is no carrot, they will endure the stick for as long as it takes. The adage still applies: the West may have the watches, but they have the time. They also have China, Iran, Pakistan, and Russia.

All things considered, the Biden administration is left with few options for engagement and an inflexible policy of counter-terrorism against threats emanating from Afghanistan. Yet, policymakers must work within these constraints. As such, any policy roadmap should chart, over a period of several years, a phased engagement that would begin with unconditional humanitarian assistance, followed by a gradual reintegration with Afghanistan’s economy and trade, leading to formal recognition. This is not to suggest turning a blind eye to the Taliban’s egregious violations of human rights but the pressure to bring more open-minded policies should emanate from Afghan civil society and political groups rather than serve as a precondition for formal diplomatic and economic relations. It may be too early in the process to establish “targets,” “roadmaps,” and “timelines,” but the broad strategic outlines of a policy for engagement should be considered soon.

While the United States recently pledged millions of dollars in humanitarian aid to alleviate mass starvation, Washington’s current overall approach toward the Taliban is unlikely to change its behavior or generate positive results in the near term. Humanitarian assistance is laudable, but if the private sector is decimated due to sanctions and isolation, there is little hope for the country’s population to ever be weaned off of foreign assistance.

The American electoral cycle often hinders the implementation of consistent policies on foreign affairs and Afghanistan is no exception. The Biden administration is still smarting from a shambolic evacuation from Kabul and the killing of al-Zawahiri which may make both sides less willing to engage. Still, the U.S. government would be well advised to begin planning to restore a clear and predictable process of engagement with the Taliban government. The pressure to do so may come from any number of causes, in particular, an increased effort by Russia and China to enhance and monopolize economic relations, an expanding terrorist threat, or, hopefully, moderating positions brought about by a maturing Taliban movement. Any and all of those will be well served by a forward-leaning and comprehensive policy to engage with the Taliban to advance important U.S. interests in Afghanistan.

Tanya Goudsouzian is a Canadian journalist who has covered Iraq and Afghanistan for over fifteen years. She is a former Opinion editor of Al Jazeera English Online. Follow her on Twitter: @tgoudsouzian.