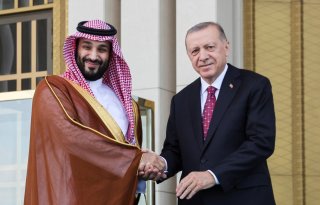 Following the meeting between the two leaders, both sides released a joint statement in which they emphasized that a new period of bilateral cooperation and good relations had begun.

Ties between Saudi Arabia and Turkey were sharply disrupted by Khashoggi’s murder, which was conducted by agents of the Saudi government. After initially denying government involvement, MBS later acknowledged that the killing had been carried out by “rogue” operatives, and several of those involved were tried and convicted for the murder within Saudi Arabia. However, both Western and Turkish intelligence agencies, including the CIA and Turkey’s National Intelligence Organization (MIT), alleged that MBS had personally ordered Khashoggi’s murder, prompting the Turkish leader to harshly criticize the Saudi crown prince and downgrade relations with Riyadh.

Four years later, as Turkey struggles with an economic crisis and inflation rates approaching 70 percent—attributable in part to Erdogan’s unorthodox views on macroeconomic policy—Saudi Arabia has emerged as a possible destination for much-needed financial support. At the same time, MBS has also sought to build goodwill among Saudi Arabia’s neighbors and diversify the country’s economy; his visit to Turkey is part of a broader tour, which included visits to Egypt and Jordan earlier in the week.

An anonymous Turkish official told Reuters that Ankara and Riyadh had eliminated restrictions on trade, flights, and the exchange of intellectual property, and had pushed their respective news agencies to eliminate negative rhetoric about one another. The official suggested that the trip would most likely bring “a full normalization and a restoration of the pre-crisis period,” although he added that extensive economic cooperation, potentially including a currency swap line, had not moved “as fast as desired.”

The two leaders also explored military cooperation, as Saudi Arabia is a major importer of arms and Turkey is a major producer. The potential of Turkey’s domestically-made Bayraktar drones was highlighted when they played a significant role in Azerbaijan’s victory in the Second Nagorno-Karabakh War in 2020. They have also been used by Ukraine’s armed forces against the Russian invasion, reportedly to great effect.

MBS’ visit to Turkey engendered criticism from human rights organizations, which criticized Erdogan for pivoting on criticism of Riyadh in exchange for economic benefits. Hatice Cengiz, a Turkish citizen and Khashoggi’s fiancee at the time of his death, wrote that MBS’s visit to Turkey “doesn’t change the fact that he is responsible for a murder.”