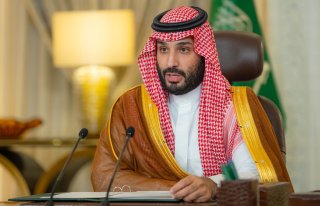 The government of Turkey announced on Thursday that it had suspended its trial of twenty-six men accused of murdering Washington Post journalist Jamal Khashoggi in order to move the trial to Saudi Arabia at the Saudi government’s request. The group of men accused of murdering Khashoggi, all Saudi citizens in the employ of the government, had been tried in absentia in Turkey, as each had returned to Saudi Arabia immediately after the killing took place.

In October 2018, Khashoggi made worldwide headlines after entering Saudi Arabia’s consulate in Istanbul to arrange documents for his upcoming marriage and disappearing inside. Saudi consular officials initially insisted that Khashoggi had left the building alive, but the Turkish government later released audio of his murder and dismemberment inside the building at the hands of a Saudi hit squad. The resulting political fallout led to worldwide condemnation of Saudi Arabia and Saudi crown prince Mohammed bin Salman (MbS), who U.S. intelligence agencies soon concluded had personally ordered the killing. Khashoggi’s assassination also led to a diplomatic crisis between Saudi Arabia and Turkey, as it emerged that Turkey had obtained audio of the murder by bugging the Saudi consulate.

Experts have argued that Turkey’s decision to move the trial to Saudi Arabia, where the result is unlikely to affect members of the royal family, was intended as a way to improve relations between Ankara and Riyadh. Under MbS, Saudi Arabia has sought greater commercial ties with its neighbors, while Turkish president Recep Tayyip Erdogan has contended with a growing economic crisis and declining popular support.

Turkish prosecutors had initially sought to move the trial in late March, but the move was delayed after a court challenge from human rights organizations. The Turkish Ministry of Justice ultimately ruled in favor of the prosecutors, allowing the trial to be moved.

The prosecutors defended their position by arguing that they could resume the trial in Turkey if it became clear that the authorities would not attempt to pursue it within Saudi Arabia. However, Reporters Without Borders, a non-profit organization dedicated to defending the freedom of information, announced that it would “keep on challenging [the move] by all means,” as did Hatice Cengiz, Khashoggi’s former fiancee.

Saudi Arabia has held several trials on the Khashoggi assassination, which the government maintains was carried out by rogue operatives acting without orders from above. Eight Saudi nationals have been sentenced to lengthy prison terms for the murder, although the trials were held behind closed doors and no additional details about the murder were made public.