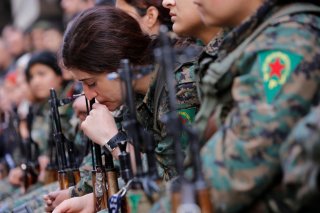 In cities where Syrian Kurdish female fighters won some of their first victories against dictators and terrorists, women now face “a pervasive climate of fear which in effect confined them to their homes” at the hands of Turkish-backed armed groups, a new report from the United Nations Commission of Inquiry on Syria has found.

The Commission report, released on September 15, found evidence that Syrian National Army members in the regions around Afrin and Ras al-Ain had committed war crimes against Kurdish and Yezidi women, including hostage-taking, torture, and rape.

Both Afrin and Ras al-Ain were once shining examples of how women could not only survive, but build innovative new democratic structures, in the midst of one of the twenty-first century’s bloodiest conflicts. They could have been a model for a stable, equitable, and peaceful postwar Syria. Instead, they are a cautionary tale of the brutal consequences of unchecked Turkish expansionism—at a time when Turkish president Recep Tayyip Erdogan has taken a newly aggressive path in the region.

Afrin and Ras al-Ain both came under the control of Syria’s Kurdish-led administration early in 2011 after regime forces withdrew, and Ras al-Ain in 2013 after a battle against Islamist groups.

In both regions, women quickly armed themselves and set up new political institutions. The first all-female unit in the People’s Protection Units (YPG), the Martyr Ruken Battalion, was founded in Afrin in February 2013. The YPJ, Women’s Protection Units, would be established there months later. One of the first institutions the new Kurdish civil administration set up in Afrin, just months after regime forces fled the city, was a women’s house—a center for women to seek safety from domestic violence, resolve family disputes, and benefit from educational and health programs targeted to women’s needs.

A 2013 survey found that women made up more than 60 percent of civil institutions in Afrin. By 2014, the region had adopted landmark legislation protecting women from gender-based violence, ensuring equality in personal status, and institutionalizing a co-chair system that ensured all leadership positions would be shared by men and women equally.

The YPJ had only existed as a separate force for a few months when Ras al-Ain was liberated. Its very existence was reportedly a wedge between Kurdish-led forces and anti-government extremists in the city—Kurds say that talks between both sides before conflict broke out were complicated, in part, by the fact that rebel leaders were unwilling to participate in meetings with YPJ commanders.

After its liberation, the multi-ethnic city worked to build a diverse democracy, forming agricultural cooperatives, health centers, and other autonomous institutions entirely run by women. As in Afrin, North and East Syria’s Women’s Laws were adopted there in full.

Turkey and the SNA attacked Afrin in January 2018, in an effort to not only remove Kurdish forces from the region but to permanently alter its demographics. In October 2019, after a midnight call between Donald Trump and Erdogan that resulted in the movement of U.S. personnel away from the Syrian border, Turkish and allied troops attacked Ras al-Ain and Tall Abyad with the same plan.

Both interventions were unilateral acts of aggression contrary to international law. They also brought a wave of violence and terror targeting Syrian women and the institutions they had fought so hard to build.

SNA fighters in both campaigns filmed themselves mutilating the bodies of fallen YPJ fighters and making misogynist remarks. Reports of abductions of women and girls surfaced as soon as the armed groups held territory. When Turkey and the SNA consolidated control of areas they occupied, women were almost completely left out of civil governance—and those who had participated in Autonomous Administration of North and East Syria (AANES) institutions were treated as criminals and spies.

The latest evidence presented by the UN sheds further light on their misogynist reign of terror. The Commission of Inquiry described one interrogation where a woman “had been threatened with rape and beaten on the head by Syrian National Army members, in the presence of Turkish officials” for the crime of trying to return to her home in occupied Ras al-Ain. It noted that UN officials had “received reports of forced marriage and the abduction of Kurdish women in Afrin and Ra’s al-Ayn,” and that the Commission was investigating the kidnappings of at least forty-nine Kurdish and Yezidi women that had occurred during the time period covered by the report.

It is now undeniably clear that women’s rights are one of the first casualties of Turkish authoritarianism and aggression. This disturbing trend is not confined to Syria. Erdogan’s domestic consolidation of power has been accompanied by an astonishing rise in the rate of gender-based violence and repeated efforts to legalize child marriage and statutory rape. A recent report from the Department of Defense Lead Inspector General has found “increasing reports” of sexual assaults committed by Turkish-backed SNA groups in Libya. With credible reports suggesting that SNA groups have been deployed to Azerbaijan to fight against Armenia, it is likely that the same patterns will repeat themselves.

Until now, the United States has done very little to hold Turkey and its proxy forces accountable for crimes against women. The State Department was notably unable to issue a statement condemning the brutal assassination of Hevrin Khalaf, a Kurdish politician who had dedicated her life to the struggle for pluralism, democracy, and gender equality in Syria—while issuing detailed statements on the deaths of obscure Arab tribal figures in Deir Ezzor. In its acknowledgment of the recent UN report, the U.S. Embassy in Syria did not name Turkey or affiliated SNA militias as actors responsible for violations, while devoting paragraphs to violations committed by Syrian government forces.

Turkey and its Syrian allies are fully aware that they can get away with these crimes unscrutinized. After the Office of the UN High Commissioner for Human Rights called on Turkey to investigate the violations detailed in the report, both Turkey and the Syrian Interim Government denied that any atrocities had taken place, and blamed other parties to the conflict for the crimes they were accused of.

This can and must change. A comprehensive framework exists under which the United States can make it clear that systemic atrocities targeting women will have consequences.

The Women, Peace, and Security Act of 2017 states that it should be the policy of the United States to “promote the meaningful participation of women in all aspects of overseas conflict prevention, management, and resolution,” and that the United States should “promote the physical safety, economic security, and dignity of women and girls” and “adjust policies and programs to improve outcomes in gender equality and the empowerment of women.”

A report from the State Department concerning the implementation of U.S. Strategy on Women, Peace and Security calls for the United States to “prevent, and pursue accountability for, abuses perpetrated by the security sector, including sexual exploitation and abuse (SEA), and other forms of [gender-based violence]” and to “prevent foreign security units that are credibly known to have perpetrated gross violations of human rights, including those involving sexual violence, from receiving U.S. security assistance.”

Blocking weapons transfers and security assistance to Turkey while its personnel oversee brutal interrogations of civilian women and its state media cheer on the murder of feminist politicians is one common-sense step. Congress has already shown its willingness to condition arms sales to Turkey. Explicitly conditioning them on an end to gross human rights abuses in Syria, especially those targeting women, would be a positive development.

Sanctioning the Syrian armed groups that kidnap and assault Kurdish women on a daily basis is another. The October 14 Executive Order on Blocking Property and Suspending Entry of Certain Persons Contributing to the Situation in Syria provides wide authority to sanction actors involved in the invasion and occupation of the Northeast and is cited in a U.S. government report as a potential authority under which Turkish-backed groups could be proscribed. This would call the legality and legitimacy of international support for these groups into question, an important step towards weakening their authority. It may also have implications for Turkish efforts to transport these groups abroad to terrorize civilians in other regions.

The United States must also press for more political engagement with the AANES, so that it can protect and expand its advances in women’s rights through a future political settlement. The Syrian National Coalition—the political arm of the rebel groups found by the UN to be guilty of rape and torture—is well-represented internationally and has a say in constitutional negotiations, largely thanks to Turkey. The AANES, the only faction in Syria to have comprehensive laws protecting women from gender-based violence and mandating gender equality in public life, does not. This is a dangerous development for half of Syria’s population, and one that American policymakers should not tolerate.

Ultimately, the United States should call on Turkey to fully withdraw from Syria. This recommendation has already been made by the U.S. Commission on International Religious Freedom, in the context of widespread abuses targeting religious minorities in Turkish-occupied areas. It is also objectively representative of the views and needs of Syrians on the ground in areas that Turkey continues to threaten:. Arab and Kurdish members of the SDF alike rank Turkey as the greatest threat they face, and hundreds of thousands of internally displaced persons from Afrin, Ras al-Ain, and Tel Abyad are now facing a global pandemic in makeshift camps because they are unable to return to their homes in occupied areas.