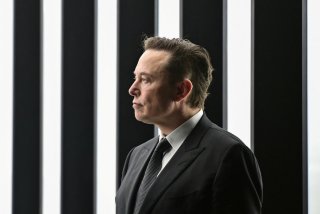 Elon Musk appeared firmly on the side of Ukraine following its invasion by Russia and was even considered a “hero” to Ukrainians at one point. That was partially due to his decision, through SpaceX, to fund Starlink satellite units for Ukraine, which allowed for crucial communications on the battlefield.

That changed, a bit, when Musk earlier this month tweeted an idea for a “peace plan” that seemed heavily tilted towards Russia’s objectives, and subsequent reporting—disputed by Musk himself—that the entrepreneur had personally spoken to Russian president Vladimir Putin before suggesting that plan.

Now, there’s word about another potential move by Musk that would undermine Ukraine’s capabilities.

CNN reported this week that SpaceX wrote to the Pentagon in early September that it could not continue to fund the satellites, instead wanting the Department of Defense to take up the cost.

“We are not in a position to further donate terminals to Ukraine, or fund the existing terminals for an indefinite period of time,” SpaceX’s director of government sales wrote in the letter.

Per Politico, Musk said on Twitter that the letter about the satellites was “just following the recommendation” of a Ukrainian diplomat who had responded to his tweet about the peace plan with an expletive.

It’s not clear what the Pentagon’s position is on whether to fund the satellites. According to Military.com, “the issue has been discussed in meetings and senior leaders are weighing the matter.” The Pentagon told that outlet that they have been “in touch with SpaceX.”

The Washington Post offered a quote from an unnamed “senior U.S. defense official” confirming that Musk had asked the Pentagon for the funds and that “there was no comparable system with such widespread applicability.”

The CEO, the official said, “dangles hope over the heads of millions, then sticks the DoD with the bill for a system no one asked for but now so many depend on. Elon’s gonna Elon.”

As is the case most days, Musk is in the news for more than one reason. His potential deal to buy Twitter remains in limbo, with the company filing documents this week stating that Musk is “presently under investigation by federal authorities for his conduct in connection with the acquisition of Twitter,” and that they were seeking documents in connection to that.

“Twitter requested the production of those documents months ago. But with trial just 11 days away, Defendants have still not produced them,” the Twitter legal document said.