How Did Fetterman Pull off the Pennsylvania Senate Win? 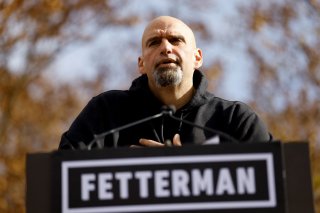 In what was probably the most closely-watched U.S. Senate race in the country, Democrat and Pennsylvania Lt. Gov. John Fetterman defeated physician and TV host Dr. Mehmet Oz in Pennsylvania. NBC News called the race at around 1 a.m. on Wednesday.

The Philadelphia Inquirer had described the race as the most expensive Senate race of the cycle, as Pennsylvanians were served commercials for and against the two candidates virtually every time they sat down to watch television throughout the fall.

The Fetterman win represented a pickup for the Democrats. The seat was held for the last twelve years by Republican Pat Toomey, who did not seek re-election. In fact, the seat had been held by Republicans for decades, except for a brief period leading into the 2010 election, when Sen. Arlen Specter switched parties and became a Democrat. It is, as of Wednesday morning, the only Senate seat in the cycle to change parties.

Fetterman, the former mayor of Braddock, Pa., stands 6′8″ and favors hoodies and shorts over the suits worn by most politicians. He had run for the same Senate seat in 2016, but lost the primary; he was elected the state’s lieutenant governor in 2018. Oz had never before run for elected office. Both candidates won crowded primaries in the spring, with Fetterman having suffered a stroke days before the Democratic primary.

Former President Donald Trump endorsed Oz during the primaries and appeared with him at a rally on the race’s final weekend. Both President Joe Biden and former President Barack Obama appeared at a rally in Philadelphia for Fetterman and Democratic gubernatorial candidate Josh Shapiro.

The stroke kept Fetterman off the campaign trail for months and appeared to affect his candidacy, especially when he visibly stumbled in the campaign’s only debate. But despite that, Fetterman led in the polls for essentially the entirety of the race. In the end, conventional wisdom saw the race as a tossup, and there was much speculation that it would take days to confirm a winner, but Fetterman won in the wee hours of Wednesday.

Oz, in ads from his campaign and groups supporting him, sought to paint Fetterman as a radical and to tie him to crime, inflation, and efforts to defund the police. In the closing days of the race, Oz pivoted to moderation, vowing to fight extremism on both sides.

Fetterman, for his part, made frequent mention of Oz’s lack of Pennsylvania authenticity, as Oz had lived in northern New Jersey for many years. At the start of the race, Oz was using a home owned by his in-laws as his Pennsylvania residence; Oz did later purchase a home in the state. Fetterman also sought to paint Oz as rich and out of touch and made hay out of Oz’s medical research that resulted in the deaths of dogs.

But Fetterman pulled out the win, taking advantage of a surprisingly strong environment for Democrats in a midterm election. Shapiro was elected the state’s governor and Democrats won several contested House races in the state, while also winning control of the state’s House of Representatives.

How did Fetterman do it? The consensus among experts seems to be that he ran a better campaign and was also just a better candidate than Oz. Fetterman was someone who had won statewide before, going against a political neophyte. Another key was that Fetterman competed all over the state, not only in “blue” areas, and therefore outperformed Biden’s 2020 numbers in nearly every one of the state’s counties, even though Biden won Pennsylvania.

“This is the Fetterman formula: a down-to-earth vibe, plus outreach to rural areas, plus pro-labor Democratic politics with some progressive accents (like supporting the elimination of the filibuster.),” Charlotte Alter wrote in Time magazine. “He knew that Pennsylvania voters would respond to a candidate who seemed like a Pennsylvania guy, who shopped at their grocery stores and rooted for their sports teams and shared their inside jokes and raised his family like they raised theirs. He knew that they would react badly to his opponent, Dr. Mehmet Oz, a slick TV doctor from New Jersey. And he knew how to reach these voters; by going to meet them where they lived, even when it was outside the traditional Democratic strongholds of Philadelphia and Pittsburgh, an all-county strategy that allowed him to run up the numbers in traditionally red areas and cut into Oz’s margins in Trump Country.”

"This race is for the future of every community all across Pennsylvania. For every small town or person that ever felt left behind,” Fetterman said in his victory speech early Wednesday. Oz conceded the race in a phone call to Fetterman later on Wednesday morning, multiple media reports said.