Student Loan Debt Is Harming Half of Americans’ Mental Health 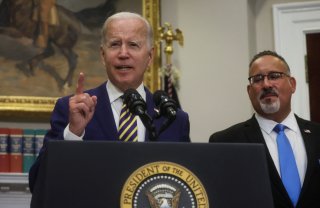 A new survey conducted by the online education platform ELVTR has revealed that 54 percent of respondents say that their mental health struggles are directly related to high student loan debt, CNBC reported.

Coming in at 56 percent, anxiety was found to be the leading mental health issue caused by student loan debts. Meanwhile, roughly 20 percent have endured sleepless nights and panic attacks and 32 percent have experienced depression.

“It isn’t just America’s pockets that are suffering,” wrote the poll, which surveyed 2,000 U.S. participants. “With many facing financial hardship like never before, the pressure of student loan repayments also impacts the nation’s mental wellbeing.”

According to the Education Data Initiative, the average student attending a public university in the United States currently borrows about $33,000 to attain a bachelor’s degree.

“With the pandemic having left 10 million Americans out of work and the cost of food, gas and rent soaring, hard-working people are being forced to cut back on essentials. For 44 million graduates, a five-figure student loan debt compounds the financial strain,” the survey wrote.

“Just one in five Americans are fortunate enough to have been unaffected by the financial climate, with the vast majority having put an important life event on hold to keep up with student loan repayments. A third have delayed starting a family, more than half have shelved their plans to save or travel, and over 60% have put a major purchase on hold,” it continued.

Adding even more concern is the expectation that tuition prices at universities will likely continue to trek higher.

“With the cost of college rising faster than inflation, the situation is only getting worse,” Roman Peskin, the founder and CEO of ELVTR, told CNBC.

There is, however, big-time help on the way from the Biden administration, which last month announced a sweeping student-loan forgiveness plan. Those with federal student loans who make under $125,000 annually, or couples earning less than $250,000, qualify for up to $10,000 in forgiveness. But if a borrower received a Pell Grant to attend college, they could potentially get up to $20,000 in relief.

Borrowers should be able to apply for forgiveness beginning next month, and roughly eight million individuals could get their loans automatically cleared because the Department of Education is already in possession of their income data. The Biden administration is expected to launch an application portal that will allow other borrowers to provide their income information.

“Nearly 90% of relief dollars will go to those earning less than $75,000 per year—and no relief will go to any individual or household in the top 5% of incomes in the United States,” it continued.