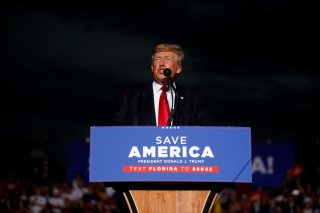 Several top advisers of former President Donald Trump are launching a new super PAC called MAGA Inc. that is expected to spend heavily over the next several weeks to support endorsed candidates in the midterm elections, according to a new Politico report, which added that the PAC could also become a campaign apparatus for a potential 2024 White House run.

Already fully sanctioned by Trump, MAGA, Inc. “will become the primary vehicle for Trump’s operation to engage in political activity in 2022,” the news outlet explained. “The outfit is designed to funnel large sums into key races and could conceivably be used to boost Trump in the event he seeks the White House again.”

The new PAC is expected to meld with an existing Trump-sanctioned super PAC, MAGA Again!, which is run by former Florida Attorney General Pam Bondi and former U.S. Ambassador to Germany Richard Grenell. As of last month, it has spent roughly $2 million to boost Trump-endorsed candidates in the Senate and House of Representatives in their primary races. Similar to Save America, MAGA, Again! can funnel its remaining funds to MAGA Inc.

According to the most recently available Federal Election Commission data, Trump had more than $103 million in his coffers at the end of August.

“President Trump is committed to saving America, and Make America Great Again, Inc. will ensure that is achieved at the ballot box in November and beyond,” Trump spokesman Taylor Budowich, who will oversee MAGA Inc., said in a statement on Friday.

The Politico report contended that “Trump has a lot riding on the outcome of the midterms.”

“The former president has endorsed a slate of candidates, whose fortunes will determine whether he emerges looking like a kingmaker or an anchor within the party. If his candidates do well, it would provide Trump momentum if he decides to run again for president. If they lose, it would raise questions about his ongoing political strength,” it continued.

Meanwhile, CNN reported that a person close to Trump said that the new PAC had been in the works for several months and is likely to become part of his campaign apparatus if he launches a widely expected third presidential bid.

“After months of eyeing a pre-midterm launch date for a 2024 campaign, Trump is now waiting to see how Republicans perform in November—hoping to avoid blame if the party's overall gains prove disappointing,” the news outlet wrote.

One Trump adviser told CNN that the former president has been “convinced there's no upside to doing it before the midterms and plenty of potential downsides. Right now, the goal is Q1 of next year but, of course, once the election has passed, he could really do it at any time.”