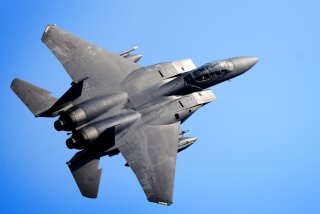 Here's What You Need To Remember: The strategy document also calls for continued fast-paced, innovation-centric sustainment and modernization efforts of major programs such as the new B-21 bomber. Technical upgrades form this basis of this, given the number of existing programs that have received new software, sensors and weapons systems.

The new U.S. Air Force Chief of Staff is now outlining an ambitious new “Change or Lose” strategy intended to push the service toward preparing for great power war against Russia or China, sustaining nuclear weapons and embracing a fast-evolving multi-domain approach.

“In most scenarios, Airmen will be the first to respond to emerging crises, given our ability to project power from afar,” the document states, emphasizing the need for fast modernization and sustainment of weapons systems.

The new Air Force Chief of Staff, Gen. Charles Brown, told reporters about the basis for the strategy document Aug 31. Brown’s document argues for the need for “greater integration across the services to deny competitors an exploitable seam,” citing the cyber domain and the importance of multi-service warfare integration.

While the need to adapt to major-power competition has certainly been established for many years now, the unveiled strategy document introduces a number of pressing and recent concerns, including the aging nature of the current nuclear arsenal, need for air-ground-sea targeting integration, challenged cross-domain command and control and the importance of sustaining the current fleet of aircraft.

Some of the requested “changes” cited by the strategy encompass major programs such as the emerging Ground-Based Interceptor (GBSD) effort, an ongoing initiative to build up to 400 new ICBMs. This effort continues to take on new urgency, given that the existing Minuteman III ICBMs are 50-years old and suffering obsolescence issues. More to the point, Air Force senior weapons developers have explained that there cannot be any delays to GBDS, to prevent the service from falling into a dangerous missile readiness “gap.”

Senior weapons developers are also moving quickly to facilitate the Pentagon’s Joint All Domain Command and Control program to better connect sensors and weapons between the services and decrease “sensor to shooter” time. Part of this involves Air Force work on a next-generation battle command technology called Advanced Battle Management System (ABMS), a networking-focused effort to link platforms, weapons and sensors to one another across a vast array of “meshed” or interwoven combat nodes.  The concept is to connect unmanned systems, platform-mounted sensors, large weapons systems and IT-databases to one another in real-time with increasing speed. This kind of interoperability is, according to Air Force leaders, intended to serve as the foundation for the Air Force’s contribution to JADC2.

At the moment, some ground, sea and air sensors are what could be called more “stovepiped,” meaning they are less able to share combat-sensitive data in real-time. Addressing this challenge is exactly the kind of “change” the Air Force document is calling for, given that much greater levels of multi-domain networking will be necessary should there be a major-power warfare scenario. Current long-range enemy sensors are increasingly able to span across domains with extended ranges, requiring a need for multi-domain defenses.

The strategy document also calls for continued fast-paced, innovation-centric sustainment and modernization efforts of major programs such as the new B-21 bomber. Technical upgrades form this basis of this, given the number of existing programs that have received new software, sensors and weapons systems. The F-35 and F-22, for instance, are consistently receiving upgrades for the specific purpose of keeping the platforms prepared for a new threat environment. These include F-35 software "drops" and F-22 weapons improvements, among other things.