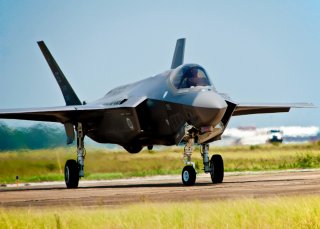 Here’s What You Need to Remember: USAF stands at a critical juncture in its beleaguered modernization program. “If the Air Force cannot rapidly transform its force design away from legacy weapon systems that limit future operational concepts, then U.S. combatant commanders will be at high risk of losing in any future conflict,” notes the author.

The U.S. Air Force (USAF) should jettison the Boeing F-15EX Eagle II fighter jet to make room for additional Lockheed Martin F-35As, according to a new paper from the Mitchell Institute for Aerospace Studies.

The forty-five-page paper, authored by Mitchell Institute senior resident fellow and former F-16 pilot Heather Penney, poses the challenge confronting USAF in stark terms: “The U.S. Air Force’s fighter force is in crisis. After three decades of canceled, curtailed, and delayed investment in fighter aircraft modernization, the nation now finds itself in major need of these capabilities with far too few advanced fighter aircraft to meet demand.” Penney’s assessment echoes the 2022 edition of Heritage Foundation’s Index of U.S. Military Strength, which posited that the USAF’s fighter inventory is currently aging faster than it can be replaced. Further stalling the procurement changes needed to keep USAF relevant into the coming decades “risks irreparable harm at a time when these sorts of capabilities matter the most,” warns Penney. To this end, the author recommends a sweeping modernization effort to “get the fighter force healthy now.”

Penney’s procurement recommendations center on her critical assessment of Boeing’s F-15EX fighter. Whilst acknowledging the F-15EX’s prodigious payload capacity and proven airframe, Penney contends that the fighter’s “advantages of convenience and management” are dwarfed by its dated design. “Airworthiness and certification,” she writes, “matter little if the aircraft is not survivable in combat.” Indeed, the F-15EX and other fourth-generation fighters are increasingly vulnerable against the modern surface-to-air and air-to-air platforms being fielded at a rapid pace by both Russia and China. The ongoing proliferation of advanced missile defense systems like Russia’s S-400 Triumf and new S-500 Triumfator-M—as well as the growing sophistication of Chinese anti-access/area-denial (A2/AD) networks in vast swathes of the Asia-Pacific region—makes it exceedingly difficult, if not virtually impossible in many instances, for the fourth-generation F-15EX to operate effectively in contested airspace.

The Mitchell Institute report notes that even the Air Force, which seeks to procure the F-15EX, concedes that the fighter “cannot survive in contested airspace without excessive force protection.” Top USAF officials appear to acknowledge that the fighter will serve as a “defensive counter-air platform only, conducting base and homeland defense missions outside any advanced theater threat envelope.” These limitations, according to the report, mean that the F-15EX would be restricted to locations such as Hawaii, Alaska, and the continental United States But, argues Penney, the basic goal of homeland defense can be achieved at far less cost by extending the lifespan of the F-16C/D fighters, which can fulfill a similar purpose at a fraction of the cost per flying hour.

The report notes that fourth-generation fighters are more of a liability than an asset in any type of prolonged great-power conflict. The F-15EX, writes Penney, “will require fifth-generation aircraft to protect them if they are to operate in contested battlespace,” thus preventing fifth-generation fighters like the F-35 and F-22 from performing at their “full operational potential.” The report contends that force-tiering is military and logistically ineffective, as “fourth-generation aircraft create a vulnerability that adversaries could exploit.”

“Stealth,” adds Penney, “is the cost of entry into any modern battlespace.” This brings the author to the report’s key procurement proposals: USAF “should seek the soonest termination point for the F-15EX and redirect that funding to increase F-35 production and begin the development of an affordable, general-purpose, stealthy fighter program that will be relevant to the threats of the future.” Penney adds that F-35 production must be immediately ramped up to offset the pace of legacy fighter retirements: “every F-35A that is not bought between now and the end of the decade is one less Block 4 aircraft in the Air Force’s 2030 inventory,” the report emphasizes.

The paper contends that deprioritizing F-35A procurement today would create a dangerous capabilities gap that will fester well into the mid-2030s. Recent war games found that the Block 4 revision of the F-35, boasting upgraded weapons, avionics, and sensors, is an indispensable tool of American airpower in a potential China conflict scenario. Penney notes that every F-35 purchased from fiscal year 2023 onward “will have the required foundation of hardware to support Block 4 capabilities,” making current F-35 procurements a prudent long-term investment.

The Mitchell Institute report compellingly argues that debates over the F-35’s costs have all-too-often focused on acquisition or flight costs, omitting “cost-per-effect.” This metric, notes the report, is a more accurate way to assess the true costs of operating a fighter because it “captures the total cost to achieve a specific mission outcome, to include not just the aircraft executing the actual task, but also aerial refueling tankers, electronic jamming platforms, air superiority cover, suppression of enemy air defenses, and other enabling capabilities.” A single F-35 can accomplish missions that potentially require not two, but multiple fourth-generation fighters, offering substantial operational savings over the course of the F-35’s lifespan.

The report goes on to suggest that USAF’s official procurement target of 1,763 F-35As—a figure, according to the author, reflective of the myopic 1990s emphasis on military downsizing—is too small to address the complex threats confronting vital U.S. interests in the present day. “It seems reasonable to believe,” writes Penney, “that, even with more advanced capabilities, the peer adversaries and global security environment of today demand greater numbers of F-35As than predicted during the mid-1990s.”

USAF stands at a critical juncture in its beleaguered modernization program. “If the Air Force cannot rapidly transform its force design away from legacy weapon systems that limit future operational concepts, then U.S. combatant commanders will be at high risk of losing in any future conflict,” notes the author.

The Mitchell Institute report reaffirms the mounting bipartisan consensus of top military experts: to curtail F-35 production in the present domestic and geopolitical context is to court an unmitigated national security disaster.