Everything You Wanted to Know About the Eurofighter Typhoon 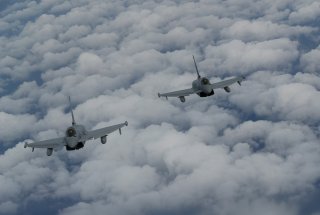 Here's What You Need To Remember: The Eurofighter Typhoon has been around for decades - and is still one of the best fighters in the sky. Its designers opted for forego stealth for speed and maneuverability, and the Typhoon has plenty of each.

One of the European community’s most successful joint defense projects, the Eurofighter Typhoon has distinguished itself as a versatile and exceptionally agile fighter over its two decades of service.

In the early 1970s, several Western European states perceived the need for a new fighter platform to phase out their aging, largely U.S.-made stock of fighters that included the F-4 Phantom. With the 1970s Panavia Tornado capably filling a strike role, the European community coalesced around an air superiority fighter project.

The prospective fighter’s outlines were drawn with the 1983 launch of the Future European Fighter Aircraft (FEFA) program, a procurement search jointly organized by France, Germany, Spain and the UK—the former eventually parted ways with FEFA over design disagreements and proceeded with its own, domestically produced Dassault Rafale fighter. Several years later, the multinational “Jagdflugzeug GmbH” consortium was established to oversee the project. Following a series of delays spurred by cost and burden-sharing concerns among the partners, the Eurofighter prototype made its maiden flight in 1994.

Designed around a core focus on maneuverability, the Typhoon sports a delta wing airframe with frontal canards and a quadruplex redundant fly-by-wire system to compensate for its inherent aerodynamic instability. Partly as a result of this design, it quickly distinguished itself among pilots for its impressive agility in dogfighting scenarios and is likewise capable of reaching a top speed of Mach 2.  In accordance with FEFA guidelines, the Typhoon features AIM-120 missiles with Beyond-Visual Range (BVR) capability. It later became one of several fighters to launch the potent new long-range Meteor air-to-air missile. Although originally conceived for an air superiority role, the Typhoon has since been upgraded with a slew of air-to-ground weapons that make it a viable option for certain strike missions; among them, the Storm Shadow cruise missile and the British Brimstone anti-tank missile. In point of fact, the Eurofighter’s several waves of revisions have consisted largely of further weapons integration and targeting updates, notably including BAE Systems’ sophisticated helmet-mounted symbology system.

Partly as a result of its large array of externally carried weapons and its prominent canards, the Typhoon is not a particularly stealthy fighter—it has a fairly large radar cross-section in comparison to the F-22 jet, arguably still the gold standard for stealth air superiority fighters. But the Typhoon’s lack of stealth performance is not so much an oversight as it is a conscious design choice, with the manufacturer opting instead to focus on maneuverability and payload delivery/flexibility. Though it still offers competitive performance relative to its cost, the Typhoon has been somewhat eclipsed as an export product with the growing proliferation of the F-35 among NATO members.

Just over 550 Typhoon fighters have been built, with around 100 more projected to enter service in the future. The Eurofighter has enjoyed relative export success across the world, with the current list of customers ranging from Austria to Oman, Qatar, and Kuwait. Most recently, Germany and airplane manufacturer Airbus have submitted a Eurofighter package proposal to Switzerland.

The Typhoon is expected to fly for the core Western European partners until the early 2040s, when it is scheduled to be phased out in favor of Europe’s upcoming, sixth-generation Future Combat System (FCAS) project.

Mark Episkopos is a national security reporter for the National Interest. This article originally appeared several weeks ago.