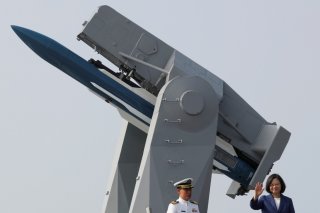 Here's What You Need to Remember: President Tsai Ing-wen made bolstering Taiwan’s defense a key campaign promise in her 2020 re-election campaign earlier this year, and already the defense budget for fiscal year 2021 (FY21) has been increased by more than 20 percent. The budget accounts for 2.36 percent of the island nation’s GDP reported the Taipei-based The News Lens.

Last week the United States Department of State approved the second weapons sale to Taiwan in just over a week. This deal for 400 anti-ship cruise missiles, which is worth a reported $2.37 billion, follows a sale of three weapons systems in a separate deal worth $1.8 billion. This is the ninth weapons sale approved by Washington to Taipei since President Donald Trump was elected in 2016.

“The proposed sale serves U.S. national, economic, and security interests by supporting the recipient’s continuing efforts to modernize its armed forces and to maintain a credible defensive capability,” said the State Department, which must approve sales to Taiwan. This has been a sensitive issue since the United States switched its recognition from the Republic of China in Taipei to the People’s Republic of China in Beijing in 1979.

The Harpoon, developed in the 1970s, offers a range of just 67 nautical miles, which could cover most of the Taiwan Strait yet not strike targets on the Chinese mainland. That essentially makes it a defensive weapon, should the People’s Liberation Army (PLA) mount a cross-strait invasion. In such a capacity, it has been suggested that it could possibly limit a crisis from escalating.

The State Department had already approved Foreign Military Sales (FMS) earlier in October and delivered them electronically to Congress from the Pentagon’s Defense Security Cooperation Agency.

That deal included eleven Lockheed Martin High Mobility Rocket System (HIMRARS) truck-based rocket launchers, for an estimated $436.1 million; one hundred and thirty-five AGM-84H Standoff Land Attack Missile Expanded Response Missiles along with related equipment supplied by Boeing Co, for an estimated $1.008 billion—it is a remotely controlled missile that can be redirected to another target after launch if the original target has been destroyed or is no longer considered dangerous; and six MS-110 Recce external sensor pods made by Collins Aerospace for jets, at an estimated cost of $367.2 million.

In response to the deal, Beijing has said it would impose sanctions against Boeing, Lockheed Martin, and Raytheon for offering weapons to Taiwan in an effort to “uphold national interests.”

However, these recent sales shouldn’t come as surprise to Beijing. President Tsai Ing-wen made bolstering Taiwan’s defense a key campaign promise in her 2020 re-election campaign earlier this year, and already the defense budget for fiscal year 2021 (FY21) has been increased by more than 20 percent. The budget accounts for 2.36 percent of the island nation’s GDP reported the Taipei-based The News Lens.

“We have been trying very hard and making a lot of efforts to strengthen our capability,” Tsai told the BBC in an interview after winning a second term by a landslide. “Invading Taiwan is something that is going to be very costly for China.”