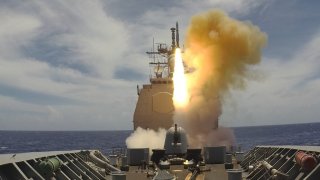 Here's What You Need To Remember: This technology, if embraced by the Army as well, would no longer limit Tomahawks from hitting ships or areas within range from the sea, but also give ground commanders an option to reach otherwise inaccessible long-range targets.

The U.S. Army is planning to “land-fire” several ship-launched Navy weapons as part of a clear effort to improve joint attack possibilities, strengthen multi-domain operations and discover innovative ways to track and destroy enemies from land.

By 2023, the Army will land-fire variants of the Navy’s Tomahawk cruise missile and SM-6 interceptor missile, bringing new technical elements to ground attack and introducing additional abilities for Army commanders to destroy moving targets at great distances from land.

The possibility, mentioned by Army Vice Chief of Staff General Joseph Martin at a recent event at the Foundation for the Defense of Democracies think tank, introduces new multi-domain warfare possibilities and brings previously unprecedented tactical options to ground commanders.

Both the Tomahawk and SM-6 Navy weapons, regarded as long-standing and quite successful, are fired from Vertical Launch Systems on board Navy destroyers and cruisers. They are also fired from submarines.

Due to their 900-nautical mile range, loiter-over-target drone-like ability, two-way datalink and combat success, Tomahawks are often the first to strike in the opening moments of military conflict. Built to counter Soviet air defenses years ago, Tomahawks fly a low-altitude trajectory, often parallel to the surface of the ocean to elude enemy radar. They are precise and have proven effective against fixed targets in the opening days of war, destroying enemy command and control centers, bunkers and other kinds of high-value infrastructure.

Of even greater significance, the Navy is now engineering a newly-configured Maritime Tomahawk with an ability to destroy moving targets at sea. This is quite significant, particularly for a weapon that has historically been used against fixed targets, as it brings an entirely new sphere of strike options to commanders amid fast-changing war circumstances. The emerging Tomahawk uses improved radio throughput along with new networking, sensing and targeting applications to adjust and re-route in flight while closing in on moving targets.

Given these factors, the tactical significance of a land-fired Tomahawk are significant, as forward positioned ground units would have an increased ability to hit inland targets otherwise out of range for a sea-launched Tomahawk. Land-fired Tomahawks, as explained by Martin, are part of the Army’s post-Intermediate-Range Nuclear Forces Treaty strategy which has now revisited the development and deployment of medium-range missile weapons previously banned by the INF Treaty. Just within the last several years, Russia’s consistent violations of the INF Treaty led the U.S. to withdraw.

While Navy SM-3 already arms land-based Pentagon Aegis Ashore ballistic missile defense systems, SM-6 would bring yet another attack or defense option to land commanders. The weapon continues to be in high demand by the Navy, in part because software upgrades have given it a “dual-mode” seeker. This enables the SM-6 to maneuver in flight and adjust to the radar ping emerging from targets on the move. Instead of needing to rely upon a ship-based illuminator for targeting guidance, a dual-mode seeker-equipped SM-6 has its own built-in receiver, allowing it to both send forward signals and receive new target information while in flight.

This would be useful to ground commanders for a number of reasons. First, as a defensive “interceptor” weapon, the SM-6 could offer a larger, more lethal interceptor weapon with which to track and destroy approaching ballistic missiles. It could potentially fill a needed gap between longer-range defenses such as an SM-3 or closer in defenses such as those used for Forward Operating Base protections. A medium-range interceptor therefore, akin to that now arming surface ships, might allow ground units to operate in higher risk areas otherwise more vulnerable to enemy fire.

Also, the SM-6 has offensive attack uses as well, a technical possibility more fully realized by its use in the Navy’s now-deployed Naval Integrated Fire Control-Counter Air system. The NIFC-CA, as it is called, uses an aerial node as a relay to find enemy attacks from beyond the horizon, network the threat information to surface ships which can then launch guided SM-6s to destroy approaching missiles from much greater distances. The earlier a commander can learn of an approaching anti-ship missile, the better the chances to defend. The successful linking or networking with a surface-ship-fired SM-6 and an aerial node such as a Hawkeye or even F-35, introduces the prospect of using the weapon to launch offensive attacks beyond the horizon as well.

It is not surprising that Martin mentioned these possibilities in the context of laying out the Army’s Multi-Domain Operations strategy which, seeks to better coordinate air-land-and-sea attacks and, as he put it, link “any sensor to any shooter.”