The M1 Abrams May Be Old, But It Still Dominates the Battlefield 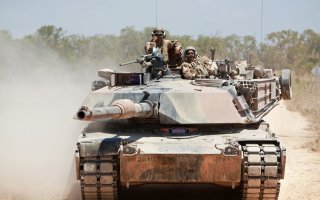 Here's What You Need to Know: The M1 Abrams is a powerhouse like few others.

One of the most iconic U.S. tanks ever produced, the M1 Abrams has distinguished itself over the course of four decades as one of the U.S. Army’s most reliable and long-lived main battle tank (MBT) platforms.

Twenty years into the Cold War competition, the U.S. Army’s MBT roster—headlined by the increasingly uncompetitive M60 Patton—was becoming outdated in light of consistent Soviet innovation. The mid-1960’s Soviet T-64, despite its steep cost and reliability problems, had no clear North Atlantic Treaty Organization (NATO) parallel at the time. The Army’s first attempt to replace the Patton, MBT-70, was a super-heavy tank jointly developed with Germany. Despite outperforming the M60 in some areas, cost inefficiency and a needlessly complex design ensured that the MBT-70 never made it past the prototype stage.

Forced to go back to the drawing board, Chrysler Defense and General Motors came up with competing prototypes that relied on vastly different engine technologies. Chrysler emerged as the winner on the back of a contentious and frequently confusing selection process, and the M1 Abrams finally entered a limited production run in 1979.

The M1 boasted a raft of advanced features for its time. Powered by a Honeywell AGT1500 gas turbine engine that could output twice the power of the M60’s Continental AV1790, the M1 came in at a hefty sixty tons and sustained a top speed of 45 mph. It was the first serially-produced tank to come with the new Chobham composite armor, offering a specific arrangement of metal plate and ceramic tiles to mitigate the impact of high-explosive anti-tank (HEAT) rounds. Also, by way of defense, the M1 featured an active protection system with a wide range of countermeasures against enemy targeting systems. The M1’s main gun was a modest Royal Ordnance L7 105 mm model; spurred by parallel Soviet advancements, later M1 variants would take the step up to the more robust Rheinmetall 120 mm.

Subsequent M1 revisions have changed everything but the name; the M1, in its recent incarnations, is an entirely different platform from the Abrams MBT’s that first rolled out in the 1980’s. The subsequent M1A1, M1A2, prospective M1A3, and their dozens of offshoots have changed virtually everything about the original platform, bringing new composite armor layouts, an improved 120 mm gun, a more robust communications network, several waves of onboard interface and display upgrades, ammunition data links, more sophisticated weapons targeting and acquisition features, and potentially even a new diesel engine (reportedly only for the M1A3).

The Abrams, in all of its many forms, served in such pivotal U.S. conflicts as the Gulf, Afghanistan, and Iraq Wars. It remains the MBT of the U.S. Army and Marine Corps, at just over 10,000 units built. The Abrams has also seen widespread export success, with the list of current operators including Saudi Arabia, Egypt, Kuwait, and Australia.

The M1 platform is an exercise in meaningful compromises; it excels at nothing, but provides a good enough blend of survivability, firepower, and mobility that makes it a compelling choice in a wide range of battlefield scenarios.