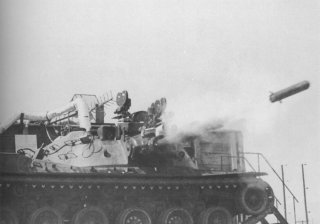 Here's What You Need To Remember: Ultimately the MBT-70 was killed by cost overruns and technological complexity. Rather than developing some design features and then incorporating them into the MBT-70 design, like the careless ammunition, the technology was installed, then extensively tested.

The United States and West Germany realized their armor was good—but would soon be outmatched by Soviet anti-tank technology. They needed something of a revolution in tank design, and got it, through the jointly-developed MBT-70. However, that amazing new tank was never more than a prototype—here’s why.

The West German Leopard I and the American M60 tank were among the best of the best in the early 1960s. Although different designs, they had good mobility, good firepower and adequate armor when facing the Soviet Union’s armor.

Observers of the 1973 Yom Kippur War noted that while Israeli M60s had fared well against Arab armor, especially older Soviet T-54s and T-55s, Soviet anti-tank missiles had been effective and deadly. The Leopard I would likely fare quite well against older Soviet tanks as well, but had similar armor vulnerabilities. The fact was anti-armor technology had developed faster than armor technology.

In light of this new information, it was decided that West Germany and the United States would jointly develop a new Main Battle Tank with the intention that it become standard for both the West German Bundeswehr and the U.S. Army and Marine Corps: the MBT-70.

A Tank is Born

The MBT-70 was a from-scratch design. Rather than an incremental improvement on existing West German or American designs, designers started totally fresh.

Like today’s South Korean K2 Black Panther, the MTB-70 had a hydropneumatic suspension that allowed the tank to kneel forward or lean backward. This gave the main gun a higher elevation range for distant targets, and a lower depression angle for fortified hull-down positions in which the tank would fire from behind protection.

It also gave the tank improved handling—on roads the tank would stay low to the ground, and cross-country the MBT-70 could pump its suspension up.

The main gun was also impressive—a 152 millimeter cannon replaced the then-standard 105 millimeter main gun. The large cannon was intended to give the MBT-70 a huge range advantage when used with new anti-tank missiles in addition to firing conventional high-explosive rounds.

The MBT-70 also had excellent mobility. It had a higher top speed than the Leopard I, the M60, and all Warsaw Pact armor. It had better acceleration, and due to its advanced suspension was easier and more comfortable for the crew to handle at high speeds than preceding tanks at lower speeds.

Armor protection was also good. A specially designed steel blend was used in the MBT-70s armor that was designed to defeat 105 millimeter rounds at close range. The armor also had a plastic polyethylene layer that could protect from radiation. Moreover, the MBT-70 could filter radioactive particles and chemical agents from the air entering the tank.

Though the MBT-70 was incredibly capable on paper, a few of the more advanced design features were either disliked by tankers or unreliable and unready due to still-as-of-yet immature technology.

From the outset, development was hindered by measurement units. The West Germans wanted to use the Metric system, the Americans wanted to use their measuring system. Though metric was eventually chosen, it caused expensive project delays, increasing development costs at a time when West Germans had limited defense money available to invest in a radical new tank project.

Though the 152 millimeter gun was in theory an advantage, the ammunition it fired was not. Rather than using a brass or metallic case, the MBT-70 fired a new caseless type of ammunition.

The case walls were combustible ostensibly to save weight. Unfortunately if the case did not burn completely, smoldering embers would stay lit in the barrel, which caused a few premature firings during testing. The new rounds were also vulnerable to moisture and could swell in size and not fit inside the gun breech if sufficiently soaked.

The MBT-70 was also heavy—much heavier than originally anticipated. This was especially a problem for the West Germans. Their domestic rail transportation infrastructure was not equipped to move such weighty loads and could be damaged in the process. Additionally, a fair number of bridges in both East and West Germany could not be safely crossed by super-heavy tanks.

The squat turret, while a defensive advantage, was disliked by tanker testers. The driver sat in a rotating capsule that always faced forwards, rather than rotating with the direction of the main gun. Tanks drivers found this disorientating.

Ultimately the MBT-70 was killed by cost overruns and technological complexity. Rather than developing some design features and then incorporating them into the MBT-70 design, like the careless ammunition, the technology was installed, then extensively tested.

Further projected ballooning costs also ended the whole endeavor. If the MBT-70 ever reached serial production, it would have cost five-times as much as the original estimates were—money that could be better reinvested elsewhere.

West Germany went on to develop the Leopard II and the United States the Abrams M1—both of which still remain in service. Perhaps it was for the better the MBT-70 never made it past the prototype stage.