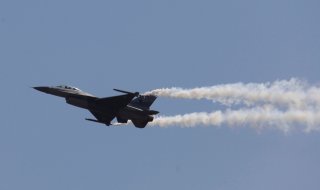 Here’s What You Need to Remember: In any case, the recent aerial skirmish highlights the important capabilities F-16s continue to provide Pakistan’s military, and the continuing tensions that may evoke as Pakistan aligns itself more with China, and the United States with India.

Between 1986 and 1990, the PAF credited the F-16 with shooting down ten Afghan and Soviet jets, helicopters and transport planes, with many additional claims unconfirmed. Soviet and Afghan records definitively confirm only six losses: four Su-22s supersonic fighter-bombers, one Su-25 “flying tank” piloted by future Russian vice president Alexander Rutskoy, and one An-26 cargo plane.

The mere possibility that a Falcon was downed by a 1950s-era MiG-21 should not be over-interpreted. India’s MiG-21 Bisons, though outdated, feature upgraded radars, data-links, self-defense jammers, and agile heat-seeking R-73 missiles targeted with a helmet-mounted sight. The airframe has always had a smallish radar cross-section, is Mach 2 capable, and performed well in exercises against U.S. F-15s and F-16s.

This article first appeared in March 2019 and is being republished due to reader interest.