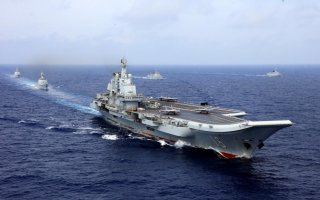 Here's What You Need To Remember: Interestingly, China has been planning a follow-on, nuclear-powered Type 003 carrier which, should it come to fruition, could rival the U.S. carrier 100,000-ton displacement size and power projection capability. The CRS report says Chinese media reports indicate that the Type 003 may be on hold for the moment.

China is planning a massive 85,000 ton, 40-plus aircraft-strong high-tech carrier engineered with an electromagnetic catapult and a much greater attack range than its first carriers. Such a move is part of an aggressive, multi-year Naval modernization initiative to help the country emerge as a leading global power.

Citing that the Chinese Navy, now having 360 ships, has already well surpassed the U.S. Navy’s 297 ships in terms of sheer size, a recent Congressional report maps out China’s ambitious aircraft carrier modernization plan. Having already launched its second carrier, the Shangdong, the Chinese have embarked upon the construction of a newer, far-more capable third aircraft carrier, according to a May, 2020 Congressional Research Service Report, “China Naval Modernization: Implications for U.S. Navy Capabilities.”

The People's Liberation Army - Navy, the report says, will likely have 400 ships and three to four aircraft carriers by 2025. Following the construction of its first indigenously-built carrier, the second carrier in the fleet overall, modeled after its ski-jump-configured Ukrainian-built Liaoning, the PLAN has embarked upon a larger, flatter, more modern carrier platform with smooth, longer-range electromagnetic catapults similar to the U.S. Ford-class. An electromagnetic catapult generates a fluid, smooth launch which is different than a steam-powered “shotgun” type take off. Also, an electromagnetic catapult extends an attack envelope well beyond what China’s existing ski jump launch makes possible.

The third carrier, identified as a Type 002 carrier, is reported to have a displacement of 80,000 tons and be able to operate a carrier air wing of more than 40 fixed-wing fighters. While conventionally powered, as opposed to the U.S. Navy’s nuclear-powered carriers, the Type 002 will greatly expand China’s air attack range and power-projection capability on a truly global scale. The Congressional report points out that such an approach appears clearly geared toward strengthening an expeditionary posture for international operations, explaining that land-launched fixed wing aircraft can easily reach Taiwan and other possible Southeast Asian targets from mainland China. This kind of forward presence will clearly enable China to exert power and influence on a global stage and exact an impact in areas it has been targeting for political and economic expansion, such as Africa.

Interestingly, China has been planning a follow-on, nuclear-powered Type 003 carrier which, should it come to fruition, could rival the U.S. carrier 100,000-ton displacement size and power projection capability. The CRS report says Chinese media reports indicate that the Type 003 may be on hold for the moment.

China is expected to arm its current and future carriers with its J-15 Flying Shark fighter and will, according to most estimations, add a carrier-launched variant of its 5th-Gen J-31 stealth fighter.

Interestingly, the CRS report explains that fast-expanding Chinese Naval power may be a key reason why the U.S.Navy is now working on engineering greater numbers of unmanned vessels to conduct dispersed, or dis-aggregated missions less vulnerable to a massive frontal Naval attack from China. The Navy calls it a Distributed Maritime Operations concept intended to leverage long-range sensors and weapons, multi-domain networking, forward operating surveillance, and precision weaponry wherein small, mobile, multi-mission unmanned systems disembark from large “motherships” operating in a command and control capacity. This not only allows larger manned vessels to remain at safer standoff distances but further enables armed attack, amphibious operations, and long-strike air support. Such a tactical approach, it seems, might easily be intended as a way to provide some strategic answers to the massive, growing international threat presented by the Chinese Navy.