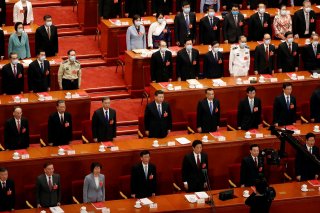 House Republicans are proposing U.S. sanctions against high-level Chinese officials, including some restrictions that would apply to all members of China’s legislature and their families.

The Republican Study Committee, which includes 147 members of Congress, published a new national security strategy on Wednesday aiming to “push back against the [Chinese Communist Party] and its efforts to undermine U.S. interests, remake the world order, and promote an alternative form of governance.”

The 120-page document proposes various sanctions against high-level Chinese officials, including a blanket ban on studying at U.S. universities. The ban would cover members of the Politburo, the Central Committee of the Communist Party, and the 2,280-delegate National Congress.

It would also extend these officials’ children and spouses.

“In recent decades, China has utilized a number of underhanded methods to pilfer the IP [intellectual property] of the United States and other Western nations,” the document states. “It should go without saying that Chinese government officials and senior [Chinese Communist Party] officials and their family members should not be able to study in the United States while China undertakes a campaign of IP theft and economic espionage against the United States.”

The Trump administration has overseen a stepped-up law enforcement crackdown on alleged IP theft as part of a “competitive approach” towards China.

FBI director Christopher Wray said in February that his bureau had about 1,000 open investigations into Chinese economic espionage at the time.

China is accused of human rights abuses in its assimilation campaigns against Tibetan Buddhists as well as Uyghurs and other Turkic Muslims in Xinjiang. Chinese authorities are also cracking down on the autonomy of Hong Kong, a city that was granted its own government under the “One Country, Two Systems” policy in 1997.

U.S. law currently mandates sanctions against Chinese officials involved in human rights abuses in Hong Kong, and a bipartisan coalition has proposed expanding those sanctions to target banks as well.

Both houses of Congress have also passed bills calling for sanctions on Chen Quanguo, the Politburo member overseeing Xinjiang.

The Republican Study Committee proposed mandating sanctions against Chen, in addition to the Minister of Public Security, the Communist Party Secretary for Tibet, and several Politburo members and senior officials responsible for Hong Kong.

These officials would have their U.S. assets frozen and be banned from entering the United States.

“As China attempts to promote an alternative theory of governance, the United States must double down on our values of freedom, democracy, and human rights as part of our strategy to counter China’s threat,” the report states.