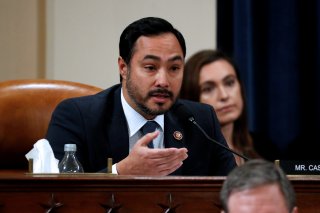 Leading a committee in Congress is an insider’s game. Committee chairmen have the power to set the agenda—literally—so Democratic and Republican party leadership usually assigns this coveted position through closed-door proceedings to each committee’s most senior member.

Castro, a congressman from Texas, is trying something new. He wants to lead the House Foreign Affairs Committee—jumping ahead of several more senior members—and has turned the race into a public debate over U.S. foreign policy.

His latest move was a conference call on Monday, in which progressive and human-rights groups had a chance to pick Castro’s brain about his plans for one of America’s most powerful policymaking bodies.

“[W]e appreciated Rep. Castro engaging with civil society and hope that the other candidates will do the same,” Mandy Smithberger, director of the Straus Military Reform Project at the Project on Government Oversight, wrote in an email to the National Interest. “As the congressman pointed out, too often these races are decided in smoke-filled rooms and with little input from the public.”

Castro used his insurgent to his advantage, challenging his opponents Brad Sherman (D-Calif.) and Gregory Meeks (D-N.Y.) to turn the foreign affairs committee race into a public debate.

“I hope that Rep. Sherman and Rep. Meeks also come in front of all of you and answer your questions,” he said on Monday. Castro called the race an “opportunity to question and hold accountable” Congress on questions of national security.

Castro’s own pitch seemed aimed at one group in particular: progressives on the left-wing of the Democratic Party.

This wing of the party is responsible for sparking the current race to lead the House Foreign Affairs Committee, which began when a progressive insurgent won an unlikely victory.

Middle school principal Jamaal Bowman had been a longshot candidate when he challenged Eliot Engel, a sixteen-term congressman and the current House Foreign Affairs Committee chair, for his seat in the New York primary elections.

Bowman hammered Engel on his foreign policy record, turning the local race into a nationwide proxy war between progressive and centrist Democrats.

And then he won.

The progressives coalition leaped into action almost immediately after Bowman’s victory, writing a letter signed by seventy groups asking Democratic leadership to “elect a chair who will lead the committee in advancing a vision of restraint and progressive realism in U.S. foreign policy.”

And they invited the three candidates to replace Engel—Castro, Brad Sherman of California and Gregory Meeks of New York—to hold conference calls with progressive advocates to discuss the House Foreign Affairs Committee race.

Only Castro has responded, according to Yasmine Taeb, senior policy counsel at the progressive group Demand Progress, which hosted Monday's call.

“It’s unprecedented and encouraging that a candidate seeking chairmanship for a congressional committee would spend time to hear directly from advocates,” she said.

All three candidates were also invited to participate in a Friday candidates’ forum organized by Demand Progress and hosted by NowThis and TheAppeal, but only Castro has accepted the invitation.

“Mr. Sherman hasn’t declined. He’s willing to talk with this group and others if Mr. Meeks agrees to participate,” a spokesperson for Sherman's office told the National Interest after this story was published. “All three candidates should be on the line to discuss their views and plans for the committee.”

Meek's office did not respond to a request for comment.

He talked about the need for a more humane immigration policy—promising a hearing on the Northern Triangle of Central America—and a foreign policy that addresses the threat of climate change. And he said that rejoining arms control agreements with Iran and Russia would be a “high priority.”

But the congressman challenged foreign policy orthodoxy on a few key issues.

Just Foreign Policy executive director Erik Sperling noted that Castro went “beyond the typical” explanations for mass migration, and did not shy away from criticizing “U.S.-backed regime change in Latin America, even when it's done through ostensibly legal but nonetheless non-electoral means.”

Castro had said that the United States “is willing to be tough on what we think of as left-wing dictators, but willing to give a pass to those on the right.”

“It’s not the job of the United States to pick a nation’s leader,” he added, speaking to concerns over the Trump administration’s Venezuela policy.

The congressman also endorsed calls to repeal the “vastly overused” 2001 and 2002 authorizations for the use of military force and cut the military budget by ten percent.

After the Iraq War, “people tended to recoil and decide, ‘I don’t want to take on the tough votes on foreign policy,’” Castro said, but “the people don’t pay us to be spectators on . . . whether the nation goes to war.”

Short of war, Castro stated that Congress should rethink economic sanctions “imposed without much preparation or thought.”

“I’m not saying that we’re not ever going to do sanctions,” he said. “I believe we need to take into account the effect of sanctions on ordinary people.”

Castro added that U.S. economic power may weaken over time because “people start to work around your sanctions.”

Finally, he dove into the Israeli-Palestinian conflict, long a thorny issue in U.S. foreign policy.

“Israel is a friend of the United States,” he said. “It’s easy to tell your adversaries when they’re wrong. It’s harder to tell your friends.”

“How is it that we can get to a point on domestic issues where more than fifty percent of Democrats can get behind Medicare For All, but we can’t get a Palestinian voice at the witness table?” Castro added.

His comments were well-received by others on the call.

Smithberger called Castro’s conference call “a model for how others seeking leadership should engage the public.”

Amb. Dennis Jett, a retired U.S. diplomat who now teaches at the Penn State School of International Affairs, told the National Interest by phone a few days after the call that he was sold on Castro.

He said that Sherman’s past votes for the Iraq War and against the Iran nuclear deal were “unacceptable,” while Meeks seemed to be “pandering” with his changing stances on Israel.

Castro is “the most qualified in terms of his outlook on the world,” Jett said. “We need that progressive viewpoint.”

Of course, young progressives are not the only votes that count.

Sherman and Meeks can both boast of decades-long careers in Congress, and powerful members of the Congressional Black Caucus have already signaled their support for Meeks as chairman of the foreign affairs committee.

But Castro is tapping into a growing wellspring of energy within the party—and may have upped the ante for his opponents.

“We need to hear that there will be a definitive break from the past. It’s time for a new generation in staff and thinking,” Sperling said, referring to his demands of Sherman and Meeks. “The Democratic Party is finally reversing its post-Reagan rightward shift on domestic policy, and the same must happen in our policy towards the 7.5 billion humans outside the U.S.”

This piece has been updated to clarify that Demand Progress organized Monday's call and the Friday candidates' forum, and to include a statement from Sherman's office provided after this article was published.