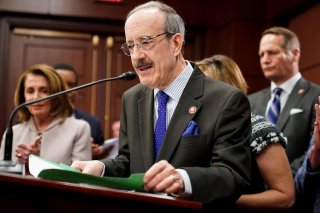 Three candidates have emerged in the race for chair of the House Foreign Affairs Committee, one of the most powerful groups in Congress.

Traditionally, the most senior lawmaker on a committee in the majority party takes over as chair. But lawmakers can jump the line with enough votes, and Engel had actually done this in order to skip past Rep. Brad Sherman (D–Calif.) in 2018.

This time around, three candidates have emerged. Rep. Gregory Meeks (D-N.Y.) and Rep. Joaquín Castro (D-Texas) are both challenging Sherman to lead the committee. And the progressives who helped unseat Engel may be happy with any of them.

“All three would be improvements over Engel, but in different ways and to varying degrees,” said Erik Sperling, executive director at Just Foreign Policy.

Engel’s foreign policy positions often placed him on the right-wing of the Democratic Party. He voted for the Iraq War in 2003, opposed the 2015 nuclear deal with Iran, voted against restrictions on arms sales to Saudi Arabia, and advocated to keep up U.S. economic sanctions campaigns on foreign countries through the coronavirus crisis.

Progressives say his ouster is a sign of a shifting party consensus to the left on foreign policy issues.

“Jamaal Bowman ran on a progressive foreign policy platform that prioritizes strengthening partnerships with allies and focusing on communities in need here,” Daniele Anderson, chief strategist at the Black Veterans Project, told the National Interest in June. “His win signals that Americans might be fatigued from the ‘forever war,’ especially when so many Americans, including veterans, are facing health and financial crises here at home.”

And they see the vacant committee chairmanship as a golden opportunity.

Seventy progressive groups sent a letter to House Speaker Nancy Pelosi (D-Calif.), Majority Leader Steny Hoyer (D-Md.) and Majority Whip James Clyburn (D-S.C.) on Tuesday asking the caucus to “elect a chair who will lead the committee in advancing a vision of restraint and progressive realism in U.S. foreign policy.”

Erica Fein, advocacy director at Win Without War, said that the letter was months in the making.

“When it looked like there'd be a race for HFAC Chair following Engel’s apparent defeat, we knew it was a moment to demand a commitment on a new vision for U.S. foreign policy, centered on people and the planet, not warmaking or boosting corporate profits,” she said. “This letter is not just an effort to shape the next HFAC Chair, it is also a signal that progressives are building power to hold the next Democratic Party foreign policy leaders accountable, whether in Congress or a possible new administration.”

Democrats have so far kept information about the next Foreign Affairs Committee chair close to the chest, while lawmakers jockey behind the scene to replace Engel in 2021.

Last month, Foreign Policy reporters Jack Detsch and Robbie Gramer reported that Meeks and Sherman were both seeking the committee chair. The Washington Post added on Monday that Castro is expected to announce his candidacy soon.

None of these lawmakers have gone public, but staffers at multiple progressive organizations confirmed that all three are in the running.

The staffers added that Rep. Karen Bass (D–Calif.) has declined calls from progressives asking her to run for the chairmanship. Bass, currently head of the Congressional Black Caucus, is reportedly being vetted to serve as Joe Biden’s running mate.

Bass’s office did not respond to a request for comment.

Castro, the eleventh-most senior committee member, has attempted to brand himself as a progressive insurgent on the committee. He promised a diplomacy-first approach that incorporates underrepresented voices, including “Palestinian voices,” in an interview with the Washington Post earlier this month.

“As Veterans who are determined to end the Forever War, we have great confidence in Rep Joaquin Castro to lead the Foreign Affairs Committee and oversee a more just foreign policy,” wrote retired Marine and Common Defense political director Alexander McCoy. “We need to go beyond repairing the damage Trump has caused and fix the disastrous mistakes of the past that helped fuel his rise, so that our foreign policy lives up to American values.”

But the four-term representative—whose twin brother Julián ran for president earlier this year—would be a longshot candidate. Sherman and Meeks are the most and second-most senior committee members other than Engel, while Castro is eleventh on the committee.

Two staffers at progressive organizations said that Meeks has an edge over Sherman, with one staffer claiming that his victory seems “inevitable” because of how well-liked he is, and because of potential support from the Congressional Black Caucus.

Castro and Meeks are part of the centrist New Democratic Coalition, not the Congressional Progressive Caucus, but are close to progressives on several foreign policy issues.

Both supported the 2015 deal with Iran and boycotted a 2015 speech to Congress by Israeli prime minister Benjamin Netanyahu warning against the deal.

Meeks has also criticized President Donald Trump’s policies as “Saudi Arabia first, not America first,” while Castro has called for an investigation into the relationship between Trump’s son-in-law Jared Kushner and the Saudi government.

Sherman supported the Iraq War and opposed the 2015 deal, making him a “red line” for many progressives.

Of course, the Middle East is not the only area where progressives will try to make a mark. The Tuesday letter to Democratic leaders criticized “regime change” operations and “non-electoral transfers of power” in Honduras, Bolivia, Brazil as well as the Middle East, singling out the Honduran military for its “well-documented track record of human rights abuses.”

Castro seems to have a distinct advantage when it comes to Latin America and is currently pushing an amendment to the military budget that would rein in the U.S. military relationship with Brazil’s right-wing president Jair Bolsonaro.

“Building on his leadership against the border wall, [Castro] is also expected to examine how US policy contributes to the root causes of migration, including bad trade deals and support for corrupt security forces,” Sperling said.

And progressives are growing more and more uneasy with U.S.-Chinese tensions, as the Trump administration combines its “competitive approach” on economics with a muscular military strategy in the South China Sea.

Sherman has used the tensions to bill himself as a voice of restraint in Asia, telling the Washington Post that China’s military threat has been inflated in order to “to justify a huge increase” in military budgets.

Sperling predicts that Sherman’s long-time outspokenness on U.S.-Chinese relations will be seen as a strength by progressives.

“While this issue is not yet at the top of many progressives' lists, the rising tension caused by the Trump administration's recent escalations are going to bring this issue to the fore quickly,” he wrote to the National Interest. “Mr. Sherman is correct that the American people would not support sacrificing American lives to fight for reefs 7,000 miles away from the US.”

Sperling added that Sherman has “broadly” been in favor of reducing U.S. troop levels abroad.

The entire 237-member House Democratic Caucus will not vote on a new committee chair after the 2020 elections, so the situation can still change dramatically by November.

Congress may look radically different, and the winner of the presidential election will also be a crucial factor in determining Democrats’ foreign policy outlook.

But one thing is for certain: Democrat leadership now has to seriously contend with pressure within the party for a less hawkish foreign policy.

“For years, there has been a disconnect between HFAC and the rest of the House Democratic Caucus regarding the United States’ most consequential foreign policy issues,” the Tuesday letter from progressive groups states. “We ask that you take this opportunity to support someone for committee chair who has a demonstrated track record of foreign policy leadership reflecting the principles, priorities, and aspirations of both the Democratic Caucus and rank-and-file Democratic voters.”