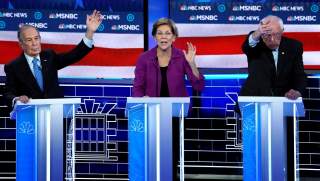 Last night’s Democratic presidential debate in Las Vegas, Nevada was a good old-fashioned Tyson v. Holyfield grudge match. The only difference was that everyone came off the stage with their ear lobes intact.

Joe Biden, struggling to maintain momentum after two horrid performances in Iowa and New Hampshire, was more firey and insistent than he usually is on the debate stage.

Elizabeth Warren, in a similar make-or-break moment, delivered an aggressive, prosecutorial performance that would make the toughest DA in Manhattan proud.

Pete Buttigieg and Amy Klobuchar were engaging in a mini-contest of their own, sniping at each other like a couple that has been married for too long.

Bernie Sanders was feisty, railing at the millionaires and billionaires for usurping the country’s wealth and gaming the system for their own advantage.

And Michael Bloomberg, a newcomer to the stage after spending millions of dollars of his own money on advertisements, came across as entitled, grouchy, clueless, and totally unprepared.

Bloomberg was the unifier of the night, in that everyone thought he was the biggest loser. Larry Sabato of the University of Virginia likened Bloomberg to a “deer-in-the-headlights” who was simply overwhelmed by the attacks. As the National Interest’s Jacob Heilbrunn summarized, “It was a big roll of the dice for Bloomberg to show up for the debate in Las Vegas, but he should have remembered that the house always wins.”

The ex-mayor of New York City, however, didn’t put up the worst performance of the night. That honor belonged to NBC News, whose moderators spent two hours grilling the candidates without throwing in one question about national security or foreign policy before adjourning at 11 pm. Americans tuning into the debate last night heard more about Joe Biden’s personal relationship with Mitch McConnell than on how any of the candidates on stage would deal with the major international issues of the day.

Perhaps the moderators don’t read the coverage of their own news organizations, but newsflash: there is a lot going on around the world as we speak.

U.S. soldiers continue to die in Afghanistan 18 years after the war against Al-Qaeda and the Taliban began. The United States and the Taliban are days away from signing an agreement that would decrease the violence, begin a partial withdrawal of U.S. troops, and pave the way to comprehensive peace talks between the Afghans themselves. What do the candidates think about the pending deal? Would they preserve a U.S. military presence in Afghanistan for the foreseeable future regardless of whether a deal between the Afghans is agreed to? Would they put an end to the combat mission entirely? We don’t know, because none of these questions were asked.

In Syria, U.S. and Russian soldiers are literally running each other off the roads in a very dangerous game of speed racing. To the west, the Syrian and Turkish militaries are coming dangerously close to a full-on conventional conflict in Idlib, the northwestern province that is home to one of the world’s most dire humanitarian catastrophes. Ankara has requested a deployment of U.S. Patriot missile systems along its southern border. If a President Sanders, Biden, or Warren were faced with this request, would they grant it? Urge a Turkish deescalation? Both? Neither? Again, we don’t know because the top never came up.

What about U.S.-Russia relations? We hear a lot from the Democratic candidates about how Moscow’s interference in the 2016 U.S. presidential election was abhorrent (it was) and how its development of new strategic weapons is thrusting the world into another arms race. But we haven’t much at all about how a future Buttigieg, Klobuchar, or Bloomberg administration would deal with Russia policy in its totality. Slapping more sanctions on the Kremlin, condemning Vladimir Putin for intervening in Eastern Ukraine, and calling Donald Trump a Russian agent are hardly sufficient answers. Last night would have been as decent a time as any to find out where the candidates stood. Instead, more time was devoted to why Klobuchar couldn’t remember the Mexican president’s name.

The next U.S. president (whoever it may be) will also be the next commander in chief. He or she will have enormous power to establish America’s foreign policy, including where Washington deploys its soldiers, whether it renters the Iran nuclear deal, how it engages with China, and how it manages a climate crisis that is getting more alarming by the week. The American people who will vote in November deserve plans, not platitudes, on all of these issues and are entitled to weigh foreign policy as a factor before they pull the lever.

These debates must stop treating national security as if it were a sideshow. Call me crazy, but arms control talks with Russia are more important than whether Michael Bloomberg loves Barack Obama.