What Does the Democrats' New Platform Say About China? 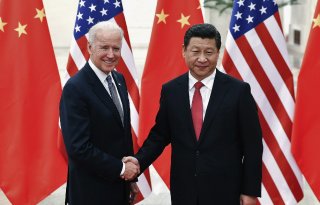 The Democratic Party has released a draft platform calling for labor and human rights pressure on China without “falling into the trap of a new Cold War.”

The document, released to party members on Tuesday night, still has to be amended and approved at the Democratic National Convention next month. But the draft language is an important signal of the Democratic position on growing U.S.-Chinese tensions.

“America must approach our relationship with China with confidence—the confidence to lead international efforts to push back on malign behavior while also pursuing cooperation on issues of mutual interest like climate change and nonproliferation and ensuring that the U.S.-China rivalry does not put global stability at risk,” the draft reads.

It comes as some Democrats portray President Donald Trump as an enemy of human rights activists in both China and America and others warn about the prospects of a second Cold War.

The draft platform takes issue with the Chinese government’s behavior on several fronts, most of them related to domestic issues.

It promises “aggressive action against China or any other country that tries to undercut American manufacturing” or steal intellectual property, calls for a “united front to keep states like China from outsourcing pollution to other countries,” and condemns crackdowns on Uyghur Muslims and Hong Kong activists.

The draft also promises to keep up the U.S. military presence in the South China Sea, where U.S.-Chinese tensions have been heating up in recent days

“Democrats believe the China challenge is not primarily a military one, but we will deter and respond to aggression,” the draft platform reads. “We will underscore our global commitment to freedom of navigation and resist the Chinese military’s intimidation in the South China Sea.”

Democrats’ most vehement source of disagreement with the Trump administration seems to be over its handling of the U.S.-Chinese trade war. The draft platform simultaneously condemns Trump’s trade policy as too hard and too soft on China.

“The Trump Administration has failed time after time to deliver for American workers on this crucial issue, siding with corporate interests over our workers and launching a trade war with China that they have no plan for winning,” it reads.

“Democrats believe that if the United States does not work with its allies and partners to shape the terms of global trade, China will shape them for us—and American working families and the middle class will pay the price,” the draft platform continues. “That’s why we will work with our allies to mobilize more than half the world’s economy to stand up to China and negotiate from the strongest possible position.”

Indeed, the document echoes the emerging “Biden doctrine,” emphasizing that allies are necessary to confront malign Chinese actions, and warning that the Trump administration has undermined these alliances.

And the Democrats acknowledge the need to work with China on two key areas: nuclear nonproliferation and the environment.

The draft platform promises to “negotiate arms control agreements that reflect the emergence of new players like China,” which the Trump administration has also made efforts to do, and refers to climate change as an area of “mutual interest.”

The document promises to bring all of these interests together without “without resorting to self-defeating, unilateral tariff wars or falling into the trap of a new Cold War.”

“Those mistakes would only serve to exaggerate China’s weight, over-militarize our policy, and hurt American workers,” it reads.