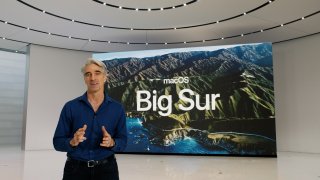 Apple’s new Big Sur version of its MacOS operating system, revealed at the company’s Worldwide Developers Conference on Monday, features a beautiful redesign that places a particular focus on the Safari web browser.

Safari is now packed with an array of new features, including a customizable start page, elegantly designed and more powerful tabs, quick and easy translations and a new Privacy Report.

The updated Messages app enables users to send and receive more personal and expressive messages, and easily keep tabs on and interact within group messages. Maps also received a noticeable boost—now providing an all-new experience with immesive features for exploring while one’s out and about.

“MacOS Big Sur is a major update that advances the legendary combination of the power of UNIX with the ease of use of the Mac, and delivers our biggest update to design in more than a decade,” Craig Federighi, Apple’s senior vice president of Software Engineering, said in a press release.

“With its modern and clean look, huge improvements to key apps including Safari, Messages and Maps, and new privacy features, we think everyone is going to love the breakthrough experience that MacOS Big Sur offers.”

In the biggest update to Safari since its original launch in 2003, the web browser was refreshed to include a new Privacy Report button to let you see how websites track your data, and a monitor to check if any of your passwords were compromised. Safari will also load frequently visited sites at an average 50% faster than Chrome, according to Apple.

The Cupertino, California-based company’s MacOS, which was first released in 2001, powers the tech giant’s computers like MacBook Pro, MacBook Air and iMac.