UN7300 Series: Is This Non OLED LG HDTV Worth Your Money? 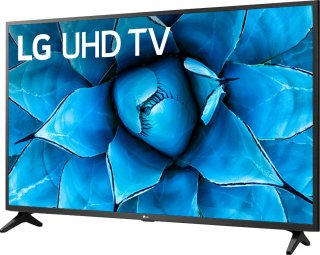 Today’s high-end OLED panels, in many respects, have become synonymous with the Korean tech giant LG.

That lofty association is well deserved—considering that the company has proven year after year that it has the ability to create some of the best HDTV panels on the planet.

But what if you’re more of a budget-conscious consumer who wants to stick with this reputable brand but can’t commit to the hefty price tags of those much-coveted OLED offerings?

Well, it seems as though you’re in luck. If you’re in the market for a non-OLED LG HDTV, make sure to pencil in the UN7300 Series, with the 55-inch model currently retailing for a reasonable $480, on your shortlist.

At that price point, it’s only a fraction of what you would normally pay for one of LG’s OLED panels. So, you might be asking—what are you missing out on? Quite a bit, actually, and that’s the chief reason why those OLED displays retail for thousands of dollars.

But that doesn’t mean that the UN7300 should be thrown out with next week’s trash. Keep in mind that this is a $480 budget HDTV, and at that price, it really is a great value no matter how you look at it.

This modern-looking set won’t necessarily blow you away by any means—but know that you’ll be getting a solid panel that should be more than enough for your everyday TV-watching needs and family movie nights.

The UN7300 boasts an exceptionally bright display via its direct backlighting, so you won’t have any problem putting it in a brightly lit or sun-drenched room. Not to be outdone, this set supports multiple must-have 4K HDR formats like Dolby Vision, HDR10, and HLG.

If you happen to be a hardcore gamer, these features, along with the Auto Low Latency Mode, will surely boost your overall gameplay experience. Keep in mind, though, that there is no local dimming.

Much like Samsung’s Tizen smart TV operating system, UN7300’s webOS is still a work in progress, though it has made considerable improvements in recent years.

Yes, it features a pleasant, stripped-down user interface, which hasn’t changed much since it launched, but it really lacks what’s needed for today’s data-intensive streaming TV world.

Not surprisingly, the webOS comes with today’s essentials like Netflix, Amazon and YouTube, which are installed by default. The overall range of offerings, however, is a bit lackluster—perhaps that is why many consumers still prefer Roku TV or Android TV. On a more positive note, the UN7300 works with both Google Assistant and Amazon Alexa for voice control.