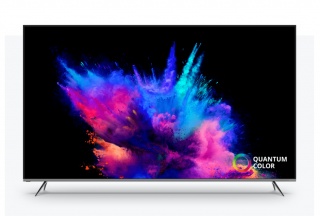 First showcased back at CES, Vizio’s new highly-regarded lineup of 4K HDTVs are now available from a wide range of retailers, including Amazon and Best Buy.

If you’ve been waiting for the company’s much-anticipated first OLED offering, however, you’ll have to stay even more patient as it won’t be out until this fall.

But if you’re one of many who are still searching for more affordable OLED HDTVs, you may be pleasantly surprised. These Vizio OLEDs still aren’t cheap by any means, but they do match up well with LG’s lower- and mid-tier OLED models. The 65-inch model is expected to retail for $1,999.99, with the 55-inch set priced at $1,299.99 (similar to LG’s B9 Series).

Vizio’s first OLED TV boasts tiny 4mm bezel, which essentially gives this set an amazing edge-to-edge picture. It is powered by the IQ Ultra processor, which taps into next-gen AI and machine learning to deliver improved colors and details.

The OLED 4K HDR Smart TV supports the much-coveted HDMI 2.1, along with HDMI eARC, and is also compatible with HDR10, HDR10+, Dolby Vision and HLG. The new ProGaming Engine, which does a wonderful job in improving graphics at up to a refresh rate of 120Hz, should be a boon for those waiting for the newest gaming consoles from PlayStation and Xbox.

The set also comes with Vizio’s latest version of its SmartCast TV operating system, which gives you access to plenty of popular streaming apps like Netflix and Amazon and supports both AirPlay 2 and Chromecast. Plus, you get compatibility with Amazon Alexa, Google Assistant and Siri.

Thanks to its software and hardware updates, SmartCast is now faster and the performance is more robust. The SmartCast mobile app is also getting a new look, with the aim of making it easier for users to control their TV from a mobile device.

The M-Series Quantum is part of Vizio’s mid-range offerings. Ranging from $399.99 for the 50-inch model to $749.99 for the 65-incher, these are solid sets that are more than passable for everyday TV watching and movie nights.