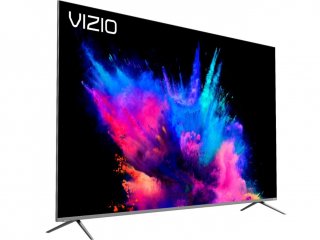 Whenever discussions veer toward the best TV panels on the planet, they invariably land on OLEDs and QLEDs.

There’s no questioning their ability to bring to the masses amazing picture quality, but at what price? If you’re in a situation where can’t just throw around $2K or $3K on an HDTV, look no further than the Vizio P-Series Quantum X.

Priced reasonably at $1,300 for the 65-inch model and $1,900 for the 75-inch beast, the Quantum X may not topple LG’s OLEDs from the summit, but it does emphatically meet the high standards of the best LCD-based, quantum dot-enhanced TVs out there—including Samsung’s much-vaunted QLED models.

Like its OLED counterpart, the Quantum X, with its own quantum color tech, boasts outstanding deep black levels and a uniform screen. And as an added bonus, this Vizio offering can get much brighter than LG’s more expensive panels—a much-needed perk if you have bright rooms or want to enjoy daytime viewing.

To achieve its highly regarded picture quality, the Quantum X features a hefty number of zones of full-array local dimming, which is great if you want to improve contrast ratios. Not to be outdone, it comes with a true 120Hz refresh rate panel and fully supports both HDR10 and Dolby Vision.

However, much like Samsung’s QLED TVs, Quantum X doesn’t perform well when it comes to wide-angle viewing. So, if you have wraparound or side seating with extreme TV angles, take note. However, there will surely be no complaints if you’re sitting directly in front of the set.

For all you gamers out there, the Quantum X also flaunts heavy-duty video processing and low input lag that can go a long way in taking your video gaming experience to the next level. Another major perk is that it comes with five HDMI inputs.

Perhaps the biggest complaint with Quantum X is the SmartCast smart TV operating system. Compared to Roku, Android TV and webOS, it isn’t as responsive and the user experience has plenty of hiccups.

In addition, the overall selection of apps is lacking somewhat, so if you love having more content than you can handle, it’s best to look elsewhere. On a positive note, the Chromecast built-in feature is a net positive for phone-centric users.