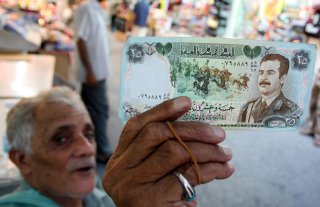 Eighteen years after a U.S.-led invasion ended President Saddam Hussein’s rule, Iraq’s moribund economy is poised to make a technological leap that could enable it to bypass both structural problems and petty corruption that have strangled its private sector. On May 1, 2021, the Trade Bank of Iraq will inaugurate its mobile money app. The move might seem minor but across the globe, the ability to pay by phone has enabled countries to leapfrog over poor physical banking infrastructure, dried up common corruption schemes, and catalyzed innovation.

For too long, corruption has strangled the Iraqi economy. Transparency International ranks Iraq as among the world’s most corrupt countries, on par with Eritrea and Cambodia, and only marginally better than a decade ago. Nationwide anti-corruption protests that erupted in October 2019 led to the prime minister’s resignation but no meaningful reform. Across the Iraqi political spectrum, one of the few commonalities remains the willingness of politicians to utilize their positions to enrich themselves, their families, or privilege their businesses. In Iraqi Kurdistan, the problem is even starker as politicians fly private jets while doctors’ and teachers’ salaries are months in arrears.

Iraq was not always a case study in dysfunctional corruption. Until Hussein invaded first Iran and then Kuwait and set Iraq down a rabbit hole of bankruptcy, black markets, and blockades, Iraq was among the Arab world’s least corrupt societies. During the 1990s, activists, diplomats, and journalists may have focused on the toll UN sanctions took on Iraqi society, but just as important was the effect of isolation. The 1990s witnessed a leap in world finance just as sanctions cut off Iraq. As a result, Iraq remains a predominantly cash economy. This not only limits Iraq’s ability to catalyze the private sector but also encourages petty corruption.

Under Hussein, and in the first years after his ouster, the Iraqi government paid salaries in cash. This not only enabled ghost employee schemes but also enabled supervisors to skim money off the tops of their subordinates’ salaries. Largely to counter such actions, the Iraqi government has long sought to move to direct deposits. Both the prime minister’s office and presidency made it mandatory but for the parliament, it has been optional.

Direct deposit of salaries is not enough for a simple reason: Iraqis do not trust banks. Banking penetration remains low. As of 2017, the number of Iraqis with bank accounts was just 20 percent. While there are now close to seventy banks operating in Iraq, the big three—Rafidain, Rasheed, and the Trade Bank of Iraq—account for 85 percent of banking assets. The only truly international bank operating in Iraq is Standard Chartered, although its branches are few and it focuses mostly on large government projects. International Smart Card, a local company, won a contract to disburse government salaries electronically via biometrically-secure Qi Cards. As of 2019, the company claimed seven million cardholders.

While Iraq’s state-run and private banks need not fail customers just because they are local, their business models have generally smothered rather than encouraged private sector development. Entrepreneurship is attractive to young Iraqis with the education and skillset to look beyond the bloated and patronage-prone public sector. Rather than leverage banking to facilitate transactions or offering loans, local banks generally make money through fees associated with wire transfers and the issuance of letters of credit. This banking environment remains a major reason why the World Bank ranks Iraq at 186 out of 190 in terms of ease of getting credit in its 2020 Doing Business Report. This in turn has led to massive capital flight from Iraq. Iraqi finance minister Ali Allawi, for example, estimates Iraq’s capital flight to total $250 billion since 2003, or more than triple Iraq’s current annual budget. The poor banking environment, meanwhile, has led ordinary Iraqis to continue to utilize informal hawala transactions because they are faster and cost less. This in turn impacts the government negatively because informal cash flow makes it almost impossible for the government to follow the money or tax it effectively. For instance, of potential $7 billion in customs revenues, the Iraqi coffer loses about 90 percent to militias and corrupt officials.

The Iraqi and Kurdish governments have done little to boost public confidence in banking. In 2012, the Central Bank of Iraq declared Warka Bank insolvent and appointed new management. A bill before the Council of Representatives on deposit insurance collects dust. When faced with a liquidity crisis in 2014, the Kurdistan Regional Government raided people’s deposits at private banks, which in turn damaged public trust in banks and banking. In 2015, North Bank closed almost all of its branches and blocked access to deposits. Many people lost their life’s savings. Successive Iraqi administrations colluded to keep foreign banks from entering the Iraqi market and disrupting the lawless monopoly they enjoyed. That lack of trust, in turn, both exacerbates corruption and undercuts Iraq’s economic potential.

While Iraqis generally have little faith in their government, they do trust private telephone companies. Prior to the U.S.-led invasion, Iraqis had a telephone system little improved from the 1950s. Exposed wires and poor infrastructure meant landline telephones often failed in rain or, in Kurdistan, snow. While corruption in the licensing surrounded the post-2003 growth of the cell industry, Iraq is fully networked. As of 2019, almost 95 percent of Iraqis own cell phones whereas just seven percent have landlines. Put another way, there were more cell phones in Iraq than in Canada. By January 2020, that number had grown even further; mobile connections now exceed the total population. Private telecom companies have connected Iraqis with each other, the outside world, and the internet. While the public may not trust banks, it trusts pre-paid phone credits, which many increasingly use as currency. Some cell phone companies like Zain have even started formal mobile wallets to pay bills and disburse money.

The coronavirus crisis has accelerated Iraqis’ acceptance of the online economy. In both Erbil and Baghdad, food delivery apps such as TipTop and Alsaree3 thrive. In Sulaymani, residents take advantage of Peykbooks.com to go beyond the limited inventory of brick-and-mortar stores.

While Iraqis are primed for the cyber economy—more than 40 percent of Iraqis were born after the 2003 war—the entrance of the Trade Bank of Iraq into the mobile currency market should reverberate far in terms of broader confidence. Consider corruption: The fine for car occupants failing to mask is 50,000 Iraqi dinars, or about $34. When paying tickets before, Iraqis never knew whether the cash they paid at the police station went into the policeman’s pocket or government coffers. But, if they pay by mobile app, they know exactly where their money goes and they generate an instant receipt showing their payment. The same would be true for any fine extracted on the street or tax bills paid to the state. Iraqi Kurdistan had the potential of becoming a hub for banking in Iraq thanks to its better security. However, the region remains hobbled by corruption. By contrast, Somaliland, which separated from Somalia the same year that Iraqi Kurdistan became functionally autonomous from the rest of Iraq, largely overcame the dysfunctional corruption and a poor banking infrastructure Iraqi Kurdistan suffers by embracing mobile money. The transition to mobile money in Rwanda helped that country move within just fifteen years from being one of the world’s most corrupt states to maintain a Transparency International perception of corruption ranking on par with developed Central European economies and superior to Italy and Greece.

As Prime Minister Mustafa al-Kadhimi nears the end of his first year in office, he faces many of the same complaints that his predecessors did. While his team can say it has rescued Iraq from near bankruptcy based upon a combination of his predecessor’s incompetence and a precipitous decline in the price of oil, ordinary Iraqis struggle to point to any accomplishment his administration has made.

The Trade Bank of Iraq’s embrace of mobile money, however, can enable Iraq to bypass an increasingly obsolete infrastructure of brick-and-mortar banks and a system too corrupted by entrenched interests.

As the United States recalibrates its relationship with Iraq, the advent of Iraq’s cyber economy also provides an opportunity. Rather than simply abandon Iraq as military missions end, the Biden administration might consider how it can encourage the evolution of Iraq’s economy. The keys to stability in Iraq are jobs and business. Employment drains the recruiting pools of militias and terrorist groups while businessmen crave stability and security to grow their businesses. Many regions in Iraq—Karbala, al-Anbar, and Baghdad, for example—now have the capacity to attract investors and enable them to win handsome profits. Mobile money eases doing business, sidesteps onerous banking fees, and supports greater transparency. The Iraqi government is especially keen to attract American businesses given a U.S. Foreign Corrupt Practices Act that prohibits American companies from engaging in bribery and other schemes that encourage Iraqi corruption. Certainly, the U.S. International Development Finance Corporation, the successor agency to the Overseas Private Investment Corporation, can help underwrite the risk of American firms’ investments but the U.S. government itself can also help Iraq both develop its new generation banking infrastructure and ensure its cybersecurity. The United States also has an interest in coordinating and cooperating with Iraq to ensure its mobile money applications—designed to work interchangeably in Iraqi dinars and U.S. dollars—do not become a mechanism for Iranian sanctions evasion. The Biden administration also might help Iraq upgrade its taxation and revenue system to track and take advantage of the new system as it seeks to extricate itself from the volatility of relying on oil for its revenue.