China Girds for Undersea Battle in the South China Sea 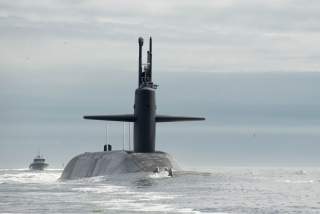 There has been significant press attention to some of China’s shiny, new military toys, such as the DF-26 “carrier killer” anti-ship ballistic missile (ASBM), the much-discussed J-20 fighter program, not to mention Beijing’s aircraft carrier program. Lately, the community of PLA-watchers is buzzing with rumors that China will soon roll out a stealth bomber. These are all legitimate subjects of discussion, to be sure, but we should not neglect the less flashy items in Beijing’s toolbox that could also have a major impact on the strategic balance.

The undersea domain is a key determinant of the emergent U.S.-China rivalry in the western Pacific. Over the years, Dragon Eye columns have examined Chinese sea mines, small frigates (type 056), anti-submarine warfare (ASW) helicopters, “missile torpedoes,” large amphibious aircraft, and unmanned undersea vehicles (UUVs) and submarines. So, American strategists should take note when China reports on the set up of a new operational unit of the People’s Liberation Army (PLA) Navy that is flying the Chinese naval service’s first genuine long-range maritime patrol aircraft (MPA) optimized for anti-submarine warfare. According to a recent issue of Ordnance Science and Technology [兵工科技], a unit comprised of several GX-6 [高新六号] ASW aircraft was activated in the South Sea Fleet during the spring of 2018.

Chinese naval analysts are aware of PLA weakness in ASW and candidly describe it as a “short board” [短板] of the Chinese Navy “barrel.” Other Chinese aerial ASW platforms, for example the SH-5 or even the Z-9 helicopter, are said to be weak and of limited capability, such that the “Chinese Navy urgently needed to be equipped with a large-size fixed-wing ASW aircraft” [中国海军迫切需要装备一型大型固定翼反潜飞机]. Given the advantages of these aircraft, including speed, range, the large payload, along with the fact that submarines have difficulty countering such aircraft, prompts this analysis to call ASW patrol aircraft as the “nemesis” [天敌] of submarines. The analysis yields that GX-6 is equipped with new type engines that include specially designed propellers to increase efficiency. The operational range is put at 5,000km.

An obvious and rather unique feature of this aircraft is the chin-mounted large protrusion just under the cockpit, which is described as a 360-degree search radar designed to detect submarine snorkeling masts, periscopes or buoys. Its detection capabilities are reported to be superior to the American P3C ASW aircraft. This analysis says the crew size might exceed ten people. GX-6 is said to carry a payload of one hundred sonobuoys. These, along with the large tail-mounted magnetometer, are to be used to localize targets. The magnetometer [磁探仪系统], according to the Chinese analysis, can detect submarines as deep as 900 or even 1000m. Whether or not this is true or simply bravado, a glance at a photo or graphic of this aircraft does imply that the magnetometer is a major and somewhat unique part of the design. The article also notes that China’s shipboard ASW helicopters are also reasonably effective against submarines, but that they have limited search ranges. It is suggested that the ASW patrol aircraft can be used to make the initial detection, while helicopters can follow up, making it very difficult for a submarine to escape.

This article says the GX-6 will be quite appropriate for use in the East and South China sea areas, as well as “can provide escort and early warning to naval forces deploying for exercises into the western Pacific” [可为海军赴西太平洋训练提供警戒和保护]. The possibility of basing in the South China Sea is mentioned quite explicitly, and the analysis notes that this would allow the Chinese Navy to track foreign submarines, causing those “undersea forces to lose their potential for surprise attack [丧失水下部队的作战突然性]” against the Chinese Navy. They can also provide security for China’s SSBNs and thus play a role in “second strike nuclear counter-attack deterrence capability [二次核反击威慑力].” The article projects that now that the design is finalized that GX-6 will enter “rapid production” [高速生产] and the size of the force will grow very significantly—a “great leap” for Chinese aerial ASW. Still, the Chinese analysis ends on a modest note, suggesting that one cannot compare the performance of this new Chinese aircraft to the most advanced U.S. (P-8) and Japanese ASW aircraft (P-1). Most important, according to this article, is that Chinese engineers have finally solved the problem of not having a large fixed-wing ASW aircraft at all.

Put together with other emergent Chinese ASW capabilities, U.S. submarines will be confronting a better-equipped rival in the Western Pacific. American submariners may have become accustomed over the last decade to operating with a high degree of freedom—nearly unopposed—but this situation is rapidly changing now. That development is particularly troubling against the background of China’s increasing capability to hold allied air bases in theater at risk, thus assuring themselves air superiority in the earliest stages of a conflict. As a result, it is conceivable that, while the U.S. Navy’s P-8 may indeed be a much superior ASW aircraft, that they are unable to fly in west Pacific skies swarming with Chinese fighters. At the same time, Chinese ASW aircraft would have the freedom to search in a greater protected status for their quarry. In this way, Chinese airpower might be starting to dent America’s previously almost unassailable advantage in undersea warfare.

One final point to take from this article is that it explicitly links this aircraft to China’s nuclear deterrent. With all the talk over the last few years about China’s new reef bases in the South China Sea, few strategists have delved into the nuclear strategy aspects of these new airfields in the Spratly Islands. As for myself, an analyst rather skeptical of the actual military value of these new reef bases (due to their inherent vulnerability), I must concede that here the Chinese strategists could have a point. If the PLA Navy uses them to operate ASW platforms like the GX-6, they could play a key role in protecting the egress of Chinese “boomers” (SSBNs) from their Hainan base. As nuclear wars are hypothetically rather brief, the long-term survival of the base may not matter as long as they were able to support the initial submarine egress to its patrol and firing station. If indeed these bases were partially constructed to support China’s evolving nuclear strategy, that could also help explain why Beijing has been so obstinate about their elaborate construction—and yet so far has not taken the step of filling up their runways with fighter interceptors, as they surely could. Fully understanding Beijing’s motives, including the long-ignored nuclear factor, in the South China Sea could help better inform American and allied response.