This Conglomerate of Countries Could Change the Face of NATO 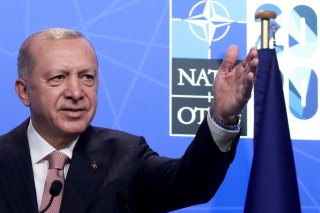 Historic change is afoot in the Eastern Mediterranean. In years to come, historians will point to this post-pandemic, post-wildfire time as the moment that the deeply idiosyncratic peoples of the Eastern Mediterranean discovered hitherto unrealized abilities to cooperate on a regional level. With interests aligned as never before, the regional powers of Turkey and Israel have the chance to create a platform for regional growth and security—a Mediterranean Union.

The Weight of History

It is barely possible to escape the weight of history in the Eastern Mediterranean. For over one thousand years, today’s Istanbul was the center of the Roman Empire. Even after its fall in 1453, the victorious Ottoman leader Mehmed II retained the title of “Kayser-I-Rum” (Caesar of Rome), and with it a sense that a strong Eastern Mediterranean could and must dynamically engage with the rest of the world.

More recently, in the 1930s, Atatürk’s new Turkish Republic shaped the interwar Balkan Pact with Yugoslavia, Greece and Romania as a platform for regional security, anticipating a rise in threat from belligerent and anti-Western neighbors.

Today’s time is no less historic. The coronavirus pandemic and a spate of terrifying wildfires have demonstrated to the peoples of Europe’s Eastern Mediterranean nations that their lives, livelihoods and prospects are more intertwined with their immediate neighbors of Turkey and Israel than with the distant powers of a European Union fixated on Northern European economic and cultural values.

To smaller nations and peoples in the region, a Mediterranean Union, built around the Western-aligned powers of Turkey and Israel, working within and alongside NATO, would be attractive. A Mediterranean Union operating under the Western aegis, sponsored by global leaders such as President Joe Biden, French president Emmanuel Macron, Turkish president Recep Erdogan and British prime minister Boris Johnson, would be an engine for growth and security and a counterweight to Russia and China’s expansionary visions for the region whilst renewing U.S. engagement in regions where lasting Atlanticist impact is feasible.

The onus is, therefore, on the region’s strongest leaders to make this change happen. With nearly twenty years of rule under his belt, Erdogan has a unique historical chance to work with others to achieve lasting regional change.

Israel is now recovering from the destabilizing effects of a series of inconclusive general elections. Under its prime minister, Naftali Bennett, Israel’s newly sworn-in government has a mandate to rip up the old rules that shaped Israel’s engagement with its neighbors. This ambition is evidenced by Israel’s firefighters offering to share firefighting technologies and personnel with wildfire-afflicted Turkey in recent weeks.

Meanwhile, over in the West, Macron will be just as keen to capitalize on the opportunities of a revitalized Mediterranean. Natural allies such as Biden’s America and Johnson’s Britain are also likely to support the project.

In many ways, these opportunities exist because of changes in Turkey. Turkey’s constitution has been reformed under the leadership of economist and political “kingmaker” Dr. Devlet Bahçeli of the Nationalist Movement Party.

A history of short-term opportunism and unstable parliamentary coalitions has given ground to a political culture capable of planning for long-term growth and deepening relationships with NATO and the West.

Militarily, Turkey’s ability to project itself beyond its borders has grown under Defence Minister Gen. Hulusi Akar. Turkey’s innovative military-industrial sector is rapidly expanding its international sales, particularly with drone technology across Europe and Eurasia.

By appointing Bahçeli and Akar as his vice-presidents, Erdogan would be able to restructure the state domestically and benefit from their sphere of power as Turkey takes its place in this union.

Turkey’s grand infrastructure play, the new Canal Istanbul, will positively affect Turkey’s borders. All Mediterranean and Black Sea countries will benefit from the resulting expansion in trade capacity and decreased friction for shipping. Moribund trade routes will revitalize, and the Eastern Mediterranean and Balkan regions will likely regain an economic vibrancy and self-sufficiency not seen for centuries. This in itself will prove an asset to Biden and the Western powers as it will decrease the promise and attractiveness of China’s Belt and Road Initiative (BRI).

It is this that, perhaps, is the biggest draw of a Mediterranean Union. What is happening in the Eastern Mediterranean will become a showcase for a new model, with attractions far greater than alternative projects such as the BRI. The model will show that countries large and small can grow together to the benefit of all. It’s a model that ties together the best elements of history with the practical promise of the present.

Alp Sevimlisoy is the CEO of Asthenius Capital, an emerging-markets-based hedge fund headquartered in London and a Millennium Fellow at the Atlantic Council headquartered in Washington, DC. Sevimlisoy is also an advisory board member at Cass Business School and an internationally published geopolitical strategist on the Mediterranean.

Peter Woodard is a Canadian-British financial technology professional with a geopolitical focus on the moving parts within NATO and the potential for an expanded role within the region. He has spent considerable time consulting stakeholders in Mexico on its role in supporting Western initiatives.

James Arnold has been involved in asset management and finance for approximately twenty-five years notably as an early member of the hedge fund industry. Arnold is also a geopolitical analyst and writes on US foreign affairs.