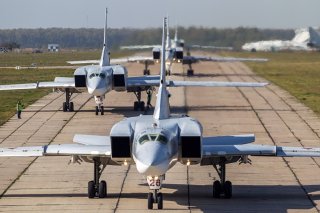 Trying to get somewhere when you don’t know where you are is difficult. This seems to be the case with a New York Times article suggesting that the Biden administration’s struggle over whether to aid a Ukrainian insurgency if Russia invades the country has “revived the specter of a new Cold War.” The United States and Russia have been in a new Cold War for eight years, ever since the 2014 Ukrainian crisis sent the relationship sailing off the rails. The task is not how to avoid a cold war, but how to work one’s way out of it. If the media and, more importantly, U.S. policymakers, don’t understand that—don’t know where they are—the chance of getting policy right is slim.

The half-century Cold War between the United States and the Soviet Union, particularly in its early years, had six qualities distinguishing it from other bread-and-butter adversarial relationships. It was driven by a deep ideological animus. The two sides had and fought for a starkly different vision of the political and economic order they wanted within and between societies. Second, each held the other side responsible for the hardened adversarial state of relations. There was no room for introspection, no willingness to consider how one’s own actions contributed to the outcome. Third, both assumed the problem arose not out of the interaction between their two countries, but from the nature of the other side. The essence of the problem was the essence of the adversary. The core struggle was not over a conflict of interests but a conflict of purpose. Thus, fourth, change could only come if the other side molted into something different or, at a minimum, altered the fundamental thrust of its foreign policy. And, fifth, elements of cooperation could only be limited and transactional, not cumulative and transformative.

That is where the United States and Russia are today. Perhaps, say some, but at least without the “ideological animus.” However, President Vladimir Putin’s strident defense of Russia’s conservative values against Western liberalism, which he claims is desiccated and morally debased, and President Joe Biden’s view that the world is locked in a struggle between autocracy and democracy serve as more than an adequate substitute.

Even the two key qualities that initially distinguished the new U.S.-Russian cold war from the original are fading. From 1949 almost to the end, the confrontation unfolded under the shadow of nuclear Armageddon. Now the crisis over Ukraine inches toward the same prospect. The U.S.-Russian cold war does not, as the earlier Cold War did, suffuse the entire international political system, but if it merges with the drift toward an equally fraught cold war with China, it will.

Call things by their name, the Russian saying goes. Then one has a chance of seeing how the miasma of cold war destroys a capacity to assess accurately what is at stake and to rethink the narrow, stunted way security challenges, such as currently over Ukraine, are defined. Unfortunately, it is at times like these when thoughts are only on one thing that the damage is greatest—when obvious truths, such as those ultimately learned toward the end of the last Cold War, are obscured. The most fundamental of those truths is that national security can only be safely secured through mutual security. Not by girding for war along Europe’s new central front, but by a return to arms control and confidence-building measures (CBMS) and by accepting a NATO closed to further expansion and a Russia done with military intimidation. Diplomats need to break out of the framework currently hamstringing their talks and dare to discuss a path leading in this direction. They then might be able to focus on the genuinely existential challenges facing them in a way their current cold war prevents: a complex, multipolar, nuclear world over which they are losing control; the devastating consequences of climate change, particularly in the Arctic; a future mega health pandemic dwarfing today’s; and the slide toward two interlocking cold wars—one U.S.-Russian, the other U.S.-China—in a new bipolar world. It took a half-century and several near misses to end the last Cold War. Let’s hope those in control end this one sooner and with no near misses.

Robert Legvold is the Marshall D. Shulman Professor Emeritus in the Department of Political Science at Columbia University and the author of Return to Cold War.