Has Western Aid for Ukraine Deterred China in Asia? 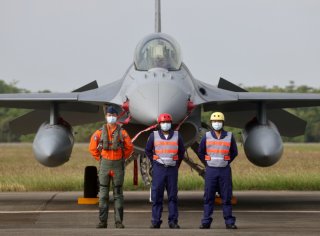 Russia has stymied its ally China, unintentionally but perhaps definitively. China had every intention of following Russia’s invasion of Ukraine this spring with a takeover of Taiwan. However, by responding to Russian president Vladimir Putin’s gamble with unexpected unity and strength, equally unintentionally, the Western allies have not only weakened Russia but appear to have deterred China from attacking Taiwan.

President Xi Jinping endorsed Russia’s plan when Putin visited Xi during the Winter Olympics, hatching up an understanding that each in succession would try to take advantage of their mutual misperception of the West’s weakness. To China’s considerable dismay, however, it watched the United States lead a vaunted global coalition against Russia in defense of a country it was not formally obligated by treaty to defend. By contrast, China is well aware that the United States has a formal defense treaty with Taiwan.

Chinese academics often provide an early tell as to what Xi and his coterie are planning in private. According to these tea leaves, China has been thwarted and its elites are distraught. In private chat rooms, Chinese generals are bemoaning their forces’ lack of battlefield experience, along with their perceived inability to win a war of information with the West. China has backed away from its full-throated public support of Russia’s war on Ukraine, for with a mercantilist export-dominated economy it simply cannot afford to be cut off from Western markets.

China knows it has suffered for its support of Russia, particularly in diplomatic terms. Recently, several key countries have openly opposed Beijing, starting with Lithuania but more recently including harsh rhetoric from Georgia, Slovakia, Poland, Romania, Finland, and especially the Czech Republic as Sweden announced it is upgrading its office in Taipei while Britain finalized a new security agreement with Japan. Moreover, prior to the populists adding insult to injury by losing in France and Slovenia, China conducted a summit with the EU that was a failure across the board (followed by the EU reporting China to the World Trade Organization for coercive actions against Lithuania, which is working with Taiwan on joint semiconductor production).

China went directly into damage control mode in Central Europe, hoping to keep alive what it refers to as the “16 + 1” framework—what it has imagined as a proto alliance with a sizable swath of democratic Europe. But the Czech foreign minister inter alia poured scorn all over China for its support of Russia and declared the death of “16 + 1.” This has only further deterred China from attacking Taiwan, as it then feebly attempted to revive the defunct EU-China investment deal of 2020 by rather ironically ratifying two International Labor Organization conventions on forced labor.

China may have just signed a defense pact with the tiny Solomon Islands, but aside from North Korea’s Kim Jong-un, China has few true allies to speak of. On the contrary, it is rapidly headed in the opposite direction having watched its reputation suffer even further when it announced an alliance with Russia “with no boundaries,” along with being the only powerful country not to denounce Russia over its war on democratic Ukraine.

China was planning to wait to attack Taiwan, which it considers Chinese territory, until later this year after a series of major Communist Party meetings related to Xi’s quest to become the longest-serving president of China. Xi already engineered Party elevation of him to Mao Zedong and Deng Xiaoping’s level of official veneration and planned to cap off last week’s Party Congress with the subjugation of Taiwan in late summer to follow on from its successful stamping out of democracy in Hong Kong.

However, China has made a series of additional stumbles that have contributed to its global demise, and further deterred it from attacking Taiwan. Recently, it supplied Russia-dominated Serbia with a cluster of ballistic missiles, pilloried Western democracies with Russian propaganda, failed to rein in North Korea, and bequeathed a deadly pandemic to the entirety of the world.

At least China can credibly claim that its reputation is not suffering as badly as Russia’s, but it is not far behind. Even the lowly Solomon Islands told the West that it will not be hosting Chinese military installations. And of course, the Quad grouping of the United States, Australia, Japan, and India is rounding on China, along with the succession of Western naval armadas that recently sailed through the Taiwanese Strait (from the UK, France, and Germany) as yet another U.S. Navy destroyer just did.

China has a lot to be held accountable for, but unlikely to go on this list is its erstwhile plan to take over Taiwan. The West and its allies need to maintain their vigilance with regard to China’s aggressive grand strategy. Xi may not get another chance, for China’s ability to project power abroad is already starting to suffer from its rapidly shrinking population at home.

Dr. Jeffrey A. Stacey is a former official in the Obama Administration and author of Integrating Europe. His forthcoming book is entitled, Full Spectrum Warfare: Donald Trump, Joe Biden, and the Fight for Global Democracy.