How America Can Support Democracy in Liberia 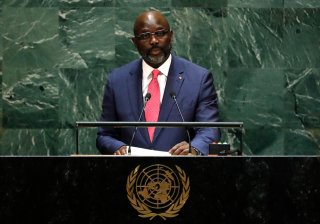 Last year, the Wagner Group erected a monument to itself in the center of Bangui, the capital of the Central African Republic, to commemorate its role in protecting its residents from ethnic cleansing and sectarian reprisal when rebels marched on the city. In reality, Rwandan bilateral forces did much more, but the Russians never let the truth get in the way of perception. Still, the monument is important as a marker of how much French influence has declined in the heart of Africa. After all, for decades the president and, at one point, emperor, of the Central African Republic had one of the tightest relationships of all Francophone African rulers to Paris.

The Central African Republic is not alone in turning its back on its former colonial master. Mali and Burkina Faso also turned away from France. The pivot to Russia was no accident. The Kremlin has scrambled to seek out opportunities and fill vacuums while also working to enrich itself at the expense of ordinary Africans. Whenever a Western government takes partners for granted, Russian diplomats, businessmen, and mercenaries are there to take advantage. By the time Wagner engrains itself, it is usually too late. It is a lot easier to prevent Russia’s entrance than extract it once it begins bribing leaders, exploiting mines, and encouraging insurgencies.

Nor is France the only country to neglect its friends and allies in Africa. The United States is also guilty. Both Democrats and Republicans have long treated Africa as a backwater. Presidents and secretaries of state might take a single swing through sub-Saharan Africa each term and make lofty declarations, but seldom follow through. The headquarters for U.S. Africa Command is not in Africa, but in Stuttgart, Germany. China now threatens to leverage the U.S. military’s chief asset on the continent out of Djibouti, while arcane State Department policy impedes AFRICOM’s desire to move the Combined Joint Task Force-Horn of Africa to Berbera, Somaliland.

There are no countries in Africa historically tied to the United States as much as Liberia. Founded 200 years ago by freed American slaves, Liberia’s capital city—Monrovia—was named after James Monroe, the fifth president of the United States. In his first address to Congress, President William Howard Taft spoke of the historic bond between the United States and Liberia: “It will be remembered that the interest of the United States in the Republic of Liberia springs from the historical fact of the foundation of the Republic by the colonization of American citizens of the African race,” he declared. “In an early treaty with Liberia, there is a provision under which the United States may be called upon for advice or assistance.” It was a provision often enacted. Throughout the nineteenth and early twentieth centuries, the U.S. Navy intervened multiple times to help the freed slaves and their descendants hold power. Ford Motors’ assembly line might have enabled America’s automobile boom, but many of these new cars would have been worthless had it not been for Firestone’s Liberian rubber plantation that, at the time, was the largest in the world. During World War II, Monrovia was home to an allied logistical base important enough for President Franklin Roosevelt to visit.

Certainly, not everything went well for Liberia. Social tension abounded and many of the country’s foreign economic relations were exploitative. In 1980, MSgt. Samuel Doe led a violent coup and murdered President William R. Tolbert, Jr. He subsequently rounded up Tolbert’s cabinet ministers and ordered them executed by firing squad. Instability followed and, within a decade, Liberia descended into the first of two civil wars that together killed a quarter million people.

At the end of the second civil war, there was hope. President Ellen Johnson Sirleaf and feminist activist Leymah Gbowee won the 2011 Nobel Peace Prize to celebrate the country’s emergence from conflict. Democracy, however, is fragile. In 2018, Liberians elected George Weah, a retired soccer star, to succeed Sirleaf. While Weah excelled on the field, warning signs abounded. While he relished the attention and was often the best athlete on his team, his teammates never elected him captain. He was not a leader of men.

Under Weah’s stewardship, Liberia’s democracy has unraveled. Weah has backtracked away from his promise and legal commitment to implement a War and Economic Crimes Court to prosecute past abuses and corruption and sought to use police to harass his chief competitor, Alexander B Cummings Jr., a fastidiously clean businessman and philanthropist and staunch supporter of robust anti-corruption measures. Weah’s harassment of Cummings should not be a surprise. More than $150 million has disappeared from government coffers on Weah’s watch. He is frightened at the prospect of accountability.

He should be. At Liberia’s bicentennial celebrations earlier this year, Dana Banks, the senior director for Africa on the National Security Council, chastised Weah’s government for corruption. On May 31, 2022, the State Department repeated the warning. “Corruption destabilizes governments, undermines democracy, and provides openings for dangerous groups such as criminals, traffickers, and terrorists. It’s important that we confront this truth and act accordingly, as if our future relies on it,” Deputy Assistant Secretary Tobin Bradley said during a visit to Monrovia.

Democracy is about accountability. With no achievements to his credit, Weah recognizes next year’s election, if conducted freely and fairly, will end his political career. Against this backdrop, he has done what other undemocratic or corrupt leaders have done in the Central African Republic, Mali, and Burkina Faso: He has reached out to the Russians.

In recent days, a dispute has emerged between the Solway Mining Company and the Liberian operations of the Indian-owned, Luxembourg-based ArcelorMittal over concessionary areas. This disagreement ultimately led to the exposure of Weah’s stake in Solway. A subsequent investigation revealed that Estonian businessman Aleksandr Bronstein had a partnership in Solway. Bronstein, who previously chaired the board of directors of the Siberian-Urals Aluminum Company, is a close associate of Russian president Vladimir Putin and sanctioned oligarch Alexey Mordashov, who owned the Putu Mining Operations in Liberia.

Liberia is at an inflection point. Weah appears willing to sell out Liberia’s future prosperity and democracy for the sake of wealth and personal power. In this, he has found willing allies in those most closely associated with Russia. Now, the question for Liberians is whether they want a prosperous future or whether they intend to follow the model established by Russia in the Central African Republic, Mali, and Burkina Faso.

Frankly, Liberians deserve better than Weah and Putin. The United States has not only a strategic interest but a historical duty to Liberia. Both Democrats and Republicans should think proactively about how to make Liberia a model of clean government, commerce, and greater equity. The best way to counter Russia and China’s influence on the continent is to show that friendship with the United States offers a better future.